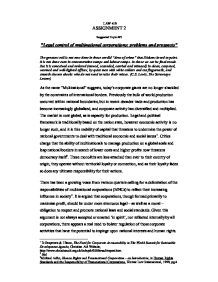 LAW 410 ASSIGNMENT 2 Suggested Topic #25 "Legal control of multinational corporations: problems and prospects" The greatest evil is not now done in those sordid "dens of crime" that Dickens loved to paint. It is not done even in concentration camps and labour camps. In those we see its final result. But it is conceived and ordered (moved, seconded, carried and minuted) in clean, carpeted, warmed and well-lighted offices, by quiet men with white collars and cut fingernails, and smooth-shaven cheeks who do not need to raise their voices. (C.S. Lewis, The Screwtape Letters) As the name "Multinational" suggests, today's corporate giants are no longer shackled by the constraints of international borders. Previously the bulk of world production occurred within national boundaries, but in recent decades trade and production has become increasingly globalised, and corporate activity has diversified and multiplied. The market is now global, as is capacity for production. Legal and political framework is traditionally based on the nation state, however economic activity is no longer such, and it is this mobility of capital that threatens to undermine the power of national governments to deal with traditional economic and social issues1. Critics charge that the ability of multinationals to manage production on a global scale and leap national borders in search of lower costs and higher profits now threatens democracy itself2. These monoliths are less attached than ever to their country of origin, they operate without territorial loyalty or connection, and as their loyalty fades so does any ultimate responsibility for their actions. There has been a growing voice from various quarters calling for a delimitation of the responsibilities of multinational corporations (MNCs) to reflect their increasing influence in society3. It is argued that corporations, though formed primarily to maximise profit, should be under more strenuous legal - as well as a moral - obligation to respect and promote national laws and social standards. ...read more.

But these acts fail to reach the real violator, providing only superficial justice, and in any case, corporations simply relocate if they encounter regulatory issues in a country of operation. MNCs have long outgrown the legal structures that govern them, reaching a level of transnationality and economic power that exceeds the power of domestic laws alone to impose basic legal and human rights norms18. Private internal codes of conduct have been touted as a possible regulatory solution. Internal codes are popular with MNCs in the textiles and clothing industries, including Gap, Levi Strauss and Nike, as a means of addressing labour rights in developing countries. In fact over 60 per cent of the top 500 companies have codes19. Internal codes offer a number of advantages. Firstly, in countries where law enforcement mechanisms are weak, self-regulation may be more persuasive and effective. Secondly they are efficient, as they avoid time-consuming negotiation processes inherent in national and international instruments. They are also flexible, allowing customisation to individual companies and countries. The key issue with internal codes relates to the weakness of enforcement provisions and compliance mechanisms. Usually the enforcement, compliance and monitoring provisions are either inadequate or simply non-existent20. The codes are not legally binding, so in effect flimsy. Furthermore, the codes often don't apply to subcontractors or subsidiaries, or universally across all operations, and they are costly to implement21. The elaborate rhetoric of company codes are often no more than a public relations tool. Internal codes lack bite. As UK Foreign Secretary Jack Straw said, "we must do what we can to encourage corporate responsibility, but we cannot leave companies to regulate themselves globally any more than we do in our national economies"22. Non-Government Organisations (NGOs) offer another avenue of regulation. However like an internal code, NGO regulation would be voluntary, and thus legally impotent. So to the second dilemma: what are the exact areas or activities which are to be regulated? ...read more.

The UN is not well placed, compared with WTO, to enforce legal control. As UN Assistant Secretary-General John Ruggie said about Global Compact: "this is not a code of conduct and the UN has neither the mandate nor the capacity to verify corporate compliance". Director of UNICEF, Carol Bellamy, warned that "it is dangerous to assume that the goals of the private sector are somehow synonymous with those of the United Nations, because they most emphatically are not"29. If any prospective regulation is to be successful then the 'home' countries of MNCs - the country of incorporation and profit repatriation - must play a role. Where MNCs operate at home they are answerable to their governments, yet developed countries have largely failed to take responsibility for the operations of their corporations overseas30. Home states are typically developed countries with a stronger legal and political infrastructure than the typical host states. Extraterritorial regulatory initiatives by home states of MNCs are important because, as compared to the host state, they usually have greater potential to be both viable and effective. The extent of corporation's responsibilities will provide long and complex debate, but a few core standards, aligned with current OECD and UN guidelines, should be fairly easily agreed upon. The standards would stipulate the minimum to be expected of the MNCs, and it would be normal business practice to meet them. In summary, the prospects for an international regulatory framework legally controlling MNCs are good. Moves have already been made by specialist international bodies, and an avid interest in corporate behaviour by NGOs will keep the topic high on the international agenda. As market liberalisation increases, and the power of MNCs with it, the major steps towards control will come. But, as demonstrated in this article, the problems associated with organising, implementing and enforcing control are many. Given the complex nature of the problems at least one thing is almost certain, an integrated regulatory framework, rather than single international, national or internal agreements, is needed. ...read more.