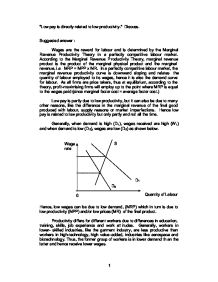 "Low pay is directly related to low productivity." Discuss. Suggested answer : Wages are the reward for labour and is determined by the Marginal Revenue Productivity Theory in a perfectly competitive labour market. According to the Marginal Revenue Productivity Theory, marginal revenue product is the product of the marginal physical product and the marginal revenue, i.e MRP = MPP x MR. In a perfectly competitive labour market, the marginal revenue productivity curve is downward sloping and relates the quantity of labour employed to its wages, hence it is also the demand curve for labour. As all firms are price takers, thus at equilibrium, according to the theory, profit-maximising firms will employ up to the point where MRP is equal to the wages paid (since marginal factor cost = average factor cost.) Low pay is partly due to low productivity, but it can also be due to many other reasons, like the difference in the marginal revenue of the final good produced with labour, supply reasons or market imperfections. ...read more.

Hence, the pharmaceutical industry can afford to pay its workers higher wages than the electronic industry. Thus, a worker in electronic industry would receive lower wages but this is not due to him being unproductive. Thus, low pay, in this instance, is not related to low productivity. Supply conditions also affect wages of labour. When supply is high (S1), wages are high (W1) and vice versa. Hence, when supply of labour is high, wages would be low as illustrated in the figure below. Supply of labour is in turn affected by the occupational mobility of labour. For example, workers in the electronic industry are less skilled than workers in the pharmaceutical industry which require higher technical know-how and skills. Hence, the former is in greater supply than the latter. This in turn would lead to lower wage rates for the former. In this case, low wages are not directly related to low productivity. Also geographical immobility can also account for wage differentials between workers in the same industry. ...read more.

Hence, a worker in a highly competitive industry with no union intervention, would receive low wages than those in an unionised industry. This low wages is not due to their lower productivity. Females also tend to receive lower wages than males due to real or imaginary differences. Some employers pay female less as they perceive them to be less efficient, more emotional and less logical. This is an imaginary difference. These low wages pay to female workers are due to discrimination by gender and not due to their low productivity. Low wages can also be caused by imperfect knowledge in the labour market. If workers in low paying jobs do not know of the availability of similar, higher-paying jobs elsewhere, they would not switch jobs and will continue with their low-paying jobs. Low wages in this case would be due to imperfect knowledge. Thus, low wages can be due to low productivity but there are many other reasons that could also contribute to a worker receiving low wages. Hence, the statement that "low wages are directly related to low productivity' is not necessarily true in all cases. 1 ...read more.