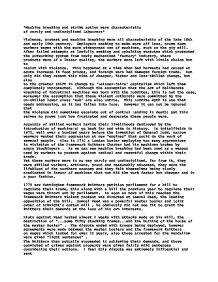 &quot;Machine breaking and strike action were characteristic of unruly and undisciplined Labourers&quot;.

"Machine breaking and strike action were characteristic of unruly and undisciplined Labourers" Violence, protest and machine breaking were all characteristic of the late 18th and early 19th century. Employers seeking to make more off less, drove down workers wages with the more widespread use of machines, such as the gig mill. After failed attempts at lawfully seeking and upholding statutes which protected the outworking system from newly mechanised 'factory' industry, where products were of a lesser quality, the workers were left with little choice but to resist with violence. This happened at a time when bad harvests had caused an acute increase in food prices, and foreign wars had damaged foreign trade. Not only did they resent this tide of cheaper, faster and less-skilled change, but also to the greater shift in change to 'Laissez-faire' capitalism which left them completely unprotected. Although the assumption that the act of deliberate wrecking of industrial machines was born with the Luddites, this is not the case, moreover the assumption that these violent outbursts were committed by the un-skilled lower class 'mob' are also untrue. This Luddite myth is one that needs addressing, as it has fallen into lore. However it can not be ignored that the violence did sometimes escalate out of control (ending in death) ...read more.

Workers clung to this statute, yet this paternalist provision was considered obsolete in this new Industrial age, the government turned its back on the renters/workers, handing over more control to the frame/factory owners in the move to a more Laissez-faire based economy. The Luddite reactions were because of this, these new economic and moral values, which essentially abandoned them in the crisis of food shortage. Their skilled work was being undermined at a very difficult time, and there was nothing they could about this gradual but overbearing wave of industrial change. The 'solicitor to General Ludd' wrote a letter to Joseph Radcliffe, the magistrate of Huddersfield, informing him that since cloth-dressers of that area had spent �7000 petitioning the government to uphold legislation against shearing frames and gig mills, and all to no purpose, then they were trying another 'method' This exact sentiment was expressed to the Home Secretary by workers in Bolton, and again all to avail. The workers had no choice, but to resist using violent force, "luddism was a last resort when other techniques had been tried and proved useless" Malcolm I. Thomis has written that he believes had there been agreements between workers and employers then there would of been "no need to resort to physical violence and illegal enterprises of Luddism" . ...read more.