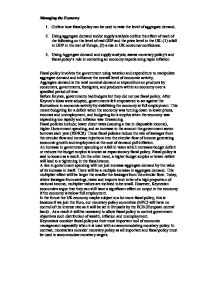 Managing the Economy 1. Outline how fiscal policy can be used to raise the level of aggregate demand. 2. Using aggregate demand and/or supply analysis outline the effect of each of the following on the level of real GDP and the price level in the UK: (1) a fall in GDP in the rest of Europe, (2) a rise in UK consumer confidence. 3. Using Aggregate demand and supply analysis, assess monetary policy's and fiscal policy's role in correcting an economy experiencing rapid inflation Fiscal policy involves the government using taxation and expenditure to manipulate aggregate demand and influence the overall level of economic activity. Aggregate demand is the total nominal demand or expenditure on products by consumers, governments, foreigners, and producers within an economy over a specified period of time. Before Keynes, governments had budgets but they did not use fiscal policy. After Keynes's ideas were adopted, governments felt empowered to act against the fluctuations in economic activity by stabilizing the economy at full employment. This meant budgeting for a deficit when the economy was turning down to lower prices, incomes and unemployment, and budgeting for a surplus when the economy was expanding too rapidly and inflation was threatening. ...read more.

I.e. X decreases making (X-M) smaller and thus reduce AD as a whole. Exports of goods and services (X) fall because the value of the output of the European economy has also fallen and they therefore have less money to spend on UK products. If AD is reduced it is evident from the diagram (next page) that GDP falls and thus price level also falls. The European countries will want to boost aggregate demand and may use monetary policy to do this; a reduction in interest rates will encourage spending in these European countries boosting AD as desired but won't prove as attractive to 'hot money'. This is money that circulates the globe taking advantage of countries offering favorable rates of interest. The UK may become an asylum to this 'hot money', an increased demand for sterling will lead to a strengthening of the pound, and thus a further increase in AD, real GDP and price level. Most theories of consumption place emphasis on the importance of consumer confidence in determining levels of spending. The willingness and ability of households to finance their spending can change as the state of the economy alters. ...read more.

In the 1950's and 1960's, governments in the western world tended to use fiscal policy as their main tool to control inflation. If inflation is demand-pull in nature (too much money, chasing too few products), then reducing the level of aggregate demand in the economy will reduce inflationary pressures. Keynesians have a propensity to argue that fiscal policy can play a crucial role in cutting aggregate demand. They key variable which the government can manipulate is the PSNCR, government borrowing. If it reduces the level of borrowing it will cut aggregate demand. It can cut borrowing either by reducing the level of government spending or by increasing taxes. If it reduces government spending, there will be a multiplier effect on national income with aggregate demand falling by more than the initial cut in government spending. Governments can also influence cost-push spirals by artificially manipulating indirect tax rates. With regard to the governments own key industries, like the post office, it can reduce expected inflation by not raising prices in line with inflation, these industries may lose out on profit, but this is an attractive compromise for lower inflation. In the 1970's the economy experienced stagflation, caused by sharp rises in world oil prices. From this time onwards Keynes's theories with regard to inflation control have been replaced with monetarist ones. ...read more.