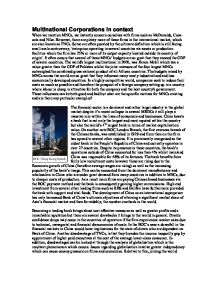 When we mention MNCs, we instantly concern ourselves with firms such as McDonalds, Coca-cola and Nike. However, there are plenty more of these firms in the international market, which are also known as TNCs. Some are often puzzled by the ultimate definition which is still facing small-scale controversy, ‘enterprise operating in several countries via assets or production facilities where the firm has 25% or more of its output capacity located outside its country of origin’. It often occurs that several of these MNCs’ budgets are so great that they exceed the GDP of several countries. The world's largest multinational in 2000, was Exxon Mobil which has a value greater than the GDP of Pakistan whilst the joint revenues of the four largest MNCs outweighed the combined gross national product of all African countries. The budgets raised by MNCs across the world are so great that they influence many newly industrialized and less economically developed countries. In a highly competitive world, companies seek to reduce their costs as much as possible and therefore the prospect of a foreign company setting up in a country where labour is cheap is attractive for both the company and the host country's government. These influences can be both good and bad but what are the specific motives for MNCs existing and are there any particular examples?

The financial sector is a dominant and rather large industry in the global market despite it’s recent collapse in several MEDCs it still plays a massive role within the lives of consumers and businesses. China boasts a bank that is not only the largest and most reputed within the country but also the world’s 4th largest bank in terms of market capitalization value. On another note BOC London Branch, the first overseas branch of the Chinese banks, was established in 1929 and from then on the firm has spread to several other regions. It is prominently recognised as the oldest bank in the People’s Republic of China and currently operates in over 27 countries. Despite its presence in these countries, the bank’s operations outside of China accounted for less than 4% whilst mainland China was responsible for 68% of its fortunes. The bank benefits from fairly low recruitment costs however these are rising due to the Economic growth of China (therefore average wages are rising) as well as the increasing popularity of the bank’s image. This can be accounted from the dominant manufacturers and wholesalers in China who are under great demand from many countries in addition to MNCs, due to cheaper costs of production. As a result more firms are paying Chinese based businesses via the BOC payment method and the bank is consequently gaining higher commissions. High end investment from several other leading firms such as RBS and Halifax have furthermore provided the bank with support and vital funds. The development of China as an international superpower has only harnessed Bank of China’s ultimate objectives of attaining a significant market share of Asia’s financial market and then formidably, the number one bank in the world.

Becoming a leading bank brings about cost effective measures as well as greater profits and a remarkable reputation but there are several drawbacks it brings to the world in general. Drastic confidence drops may occur in the countries of operation if the firm experiences weaker sales due to technical, managerial and financial diseconomies of scale. In the BOC’s case a downfall in the financial markets in China would have implications for the state of clients who are dependant on Bank of China. Another disadvantage of TNCs, is that they broaden the income inequality gap by appointment of higher paid executives at the cost of the average lower-class consumer. In addition, disadvantages can be looked at through the analysis of globalisation which is the resultant phenomenon which occurs. Issues regarding globalisation involve greater independency which can cause uneasy pressure on firms and economies. Relative to this, joining the world economy through the recognition of TNCs, means that less developed countries are exposed to external over which they have little control. Overall, globalisation may be strengthening the position of the developed countries that are able to take advantage of free trade.

The Bank of China can definitely be questioned as to whether it is realistically an MNC party due to the disputed additional definition – ‘where a firm has 25% of its output capacity outside of its home country’ – as it is believed that nearly most of its product is gathered from within Chinese territories.

Multinationals are seen in some quarters as posing a threat to individual national sovereignty, and as using undue influence to secure favourable operating conditions however they do provide increased competition and therefore offer the consumer greater choice and lower prices. In 1992, it was estimated that the world's 500 largest companies controlled at least 70% of world trade, 80% of foreign investment, and 30% of global GDP. Another related example of a TNC that provides a range of advantages and disadvantages is McDonald’s. Advantages include more job opportunities in poorer countries, greater tax revenues for governments to re-invest into infrastructure and public services. However, several problems arise which include economic imperialism, where people in third world countries are starved for the consumer’s benefit. Also, environmental impacts arise, especially under McDonald’s influence, such as the disappearance of rainforests, flooding, gross misuse of resources through the overfeeding of cattle. McDonald’s is said to be responsible for a large chunk of exploitation and the exacerbation terrible living and working conditions for those in LEDCs.

In synchronization with the critics, MNC’s do drain capital locally by invading the local market and exploiting the local people. Even though it is possible for MNC’s to help the economies of LDC’s most end up using their good positions to exploit the resources and divisions of labor for their own good’s. In addition, critics argue that MNC’s may actually hinder national growth and economic prosperity by absorbing local capital instead of providing new capital, by applying inappropriate technology, by creating “bad” jobs instead of “good” jobs, by doing research in the home country instead of in the host country, and by employing expatriate, not indigenous, managers. 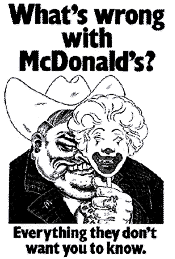 Many MNCs are large in relation to the national income of the countries in which they are located. This means that it is not as easy for the host governments to enforce national laws on MNCs. Generally speaking, governments want investment from these MNCs because they generate jobs and incomes. Other benefits include training of local workers in new and potentially transferable skills. Technology transfer is also an incentive. The local community would benefit since land would develop, eg. New roads and transport links.

Nearly all major multinationals are either American, Japanese or Western European, such as Nike, Coca-Cola, Wal-Mart, AOL, Toshiba, Honda and BMW. Several up an coming MNCs from NICs include Tata and Emirates. Advocates of multinationals say they create jobs and wealth and improve technology in countries that are in need of such development. On the other hand, critics say multinationals can have undue political influence over governments, can exploit developing nations as well as create job losses in their own home countries. Many multinational bring about great economic benefits whilst the environmental and social impacts can be unconvincing for firms within certain industries.