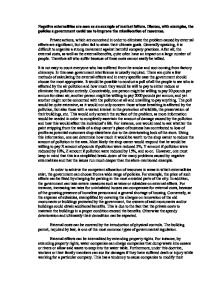 Negative externalities are seen as an example of market failure. Discuss, with examples, the policies a government could use to improve the misallocation of resources.

Negative externalities are seen as an example of market failure. Discuss, with examples, the policies a government could use to improve the misallocation of resources. Private actions, which are conceived in order to eliminate the problem caused by external effects are significant, but often fail to attain their ultimate goals. Generally speaking, it is difficult to organize a strong movement against harmful company practices. After all, the external costs, as well as the external benefits, quite often have an impact on a large number of people. Therefore all who suffer because of these costs cannot easily be tallied. It is not easy to count everyone who has suffered from the smoke and soot coming from factory chimneys. In this case government interference is usually required. There are quite a few methods of calculating the external effects and in every specific case the government should choose the most appropriate. It would be possible to conduct a poll of all the people to see who is affected by the air pollution and how much they would be will to pay to either reduce or eliminate the pollution entirely. ...read more.

Using this information, one can determine how much it would be worth to the shop owner to reduce the amount of pollution in the area. Most likely the shop owner would respond that he would be willing to pay X amount of pounds if pollution were reduced 5%, Y amount if pollution were reduced by 10%, Z amount if pollution were reduced by 15%, and so on. However, one must keep in mind that this is a simplified break-down of the many problems caused by negative externalities and that the issues run much deeper than the afore-mentioned example. In order to achieve the competent allocation of resources in areas in which externalities exist, the government can choose from a wide range of policies. For example, the price of such effects can be fixed by charging for parking in the most crowded parts of the city. In addition, the government can take severe measures such as taxes or subsidies on external effects. ...read more.

On a more proactive note, the government can undertake the supply of particular goods and services. This typically happens when: - external costs are so high that only central authorities can provide the goods or services (for example, capital needed to complete the construction of an airport) - external costs accumulate and intensify at a rate not previously foreseen (for example when inoculating the country against a particular epidemic) Regulating external effects seems to be one of the key problems for most governments nowadays, especially when dealing with crucial issues such as ecology. Indeed, one must take into account that the successful regulation of these effects goes beyond a government's national borders. Acid rain or radioactive precipitation occurring after the nuclear meltdown at Chernobyl and the ensuing ecological disaster may serve as a prime example of the previous statement. Subsequently, one might imply that external effects cause many seemingly insurmountable problems that the government must face, particularly when attempting to preserve the environment. Therefore in the course of making suitable decisions pertaining to these various issues, the government should resort to cost-benefit analysis of possible alternatives to resolve the afore-mentioned problems. ...read more.