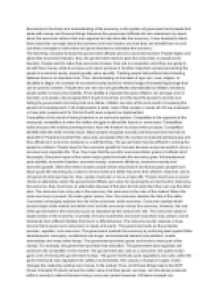 Outline the basics of economics

﻿Economics is the study and understanding of the economy or the system of government and people that deals with money and financial things. Because the government officials did not understand my report about the economic reforms that are supposed to help stimulate the economy, I have decided to teach them about few concepts about the economy and how it works and how they can benefit from me and use these concepts to make wise and good decisions to stimulate the economy. The first thing I decided to teach the government officials about is economic freedom. People highly care about their economic freedom, thus, the government needs to give the consumers or people some freedom. People want to make their economic choices; their job or occupation, what they are going to do with their money, what to produce and how to produce it. Another important concept concerning the people is economic equity; people greatly value equality. ...read more.

Competition benefits both the seller and the buyer. Many people recognize scarcity and they want to know how to deal with it. People know that if the resources are wasted then the number of products will decrease and thus efficiency in economic decisions is a definite thing. The government must be efficient in solving the people's problems. People hope for the economic growth to increase because everyone wants to have a luxurious and enjoyable life. Thus, they hope that the county's economic status grow so it effects all of the people. Everyone hopes of the seven major goals that make the economy grow; full employment, price stability, economic freedom, economic equity, economic efficiency, economic security and economic growth. Other than these dreams people dream about future and future goals; people have future goals like dreaming for a cleaner environment and better future for their children. However, we do not get all of what we hope for, thus, people must plan or have a trade offs. ...read more.