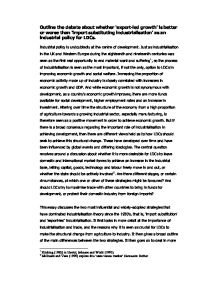 Outline the debate about whether 'export-led growth' is better or worse than 'import substituting industrialisation' as an industrial policy for LDCs.

Outline the debate about whether 'export-led growth' is better or worse than 'import substituting industrialisation' as an industrial policy for LDCs. Industrial policy is undoubtedly at the centre of development. Just as industrialisation in the UK and Western Europe during the eighteenth and nineteenth centuries was seen as the first real opportunity to end material want and suffering1, so the process of industrialisation is seen as the most important, if not the only, option to LDCs in improving economic growth and social welfare. Increasing the proportion of economic activity made up of industry is closely correlated with increases in economic growth and GDP. And while economic growth is not synonymous with development, as a country's economic growth improves, there are more funds available for social development, higher employment rates and an increase in investment. Altering over time the structure of the economy from a high proportion of agriculture towards a growing industrial sector, especially manufacturing, is therefore seen as a positive movement in order to achieve economic growth. But if there is a broad consensus regarding the important role of industrialisation in achieving development, then there are different views held as to how LDCs should seek to achieve this structural change. These have developed over time and have been influenced by global events and differing ideologies. The central question revolves around a discussion about whether it is more desirable for LDCs to leave domestic and international market forces to achieve an increase in the industrial base, letting capital, goods, technology and labour freely move in and out, or whether the state should be actively involved2. Are there different stages, or certain circumstances, at which one or other of these strategies might be favoured? And should LDCs try to maximise trade with other countries to bring in funds for development, or protect their domestic industry from foreign imports? This essay discusses the two most influential and widely-adopted strategies that have dominated industrialisation theory since the 1930's, that is, 'import substitution' and 'export-led' industrialisation. ...read more.

As the strategy was developed in many Latin American countries through the 1950's and 1960's, there is no doubt that industry was able to flourish, but the policies followed by Latin American countries were not without inherent problems. State owned enterprises, including oil, petrochemicals, telecommunications, steel and aircraft, were developed. In Brazil, for instance, there was over 50 per cent state participation in transport, water, phone, electricity, mining, developmental services and chemicals by the mid-1970's14. These industries were backed by sovereign guarantees; although this meant that pressure to make a profit was relieved, it also tended to lead to a lack of expansion because there was no money to do so without seeking further funds from government or in the form of loans from abroad. As import substitution industrialisation progressed over time, borrowing by Latin American governments grew until it became unmanageable. Governments were able to negotiate the international transfer of technology through part of the multinationals' involvement. Prices of inputs such as electricity and telecommunications, and finished goods, were kept artificially underpriced to support infant industries and enable the growing middle-class to access goods. SOEs had the power to recruit the most talented individuals, however, national pay scales tended to place a ceiling on skilled labour; additionally, political power over companies through government support led to over-employment as politicians were under pressure to secure jobs for burgeoning urban populations. Protectionism served to insulate the economy from rival foreign firms dominating the market. This was provided to infant industries, especially manufactured goods, to give them the chance to develop new products and become self-sufficient. For instance, by 1970, a 168 per cent tariff over consumer and manufactured goods existed in Brazil, and similar tariffs exceeded 100 per cent in Argentina, Chile and Colombia. In Mexico, tariffs on chemicals up to 671 per cent were in place as the domestic chemicals industry developed15. Tariff barriers and quotas were raised against foreign imports, and this further encouraged multinational involvement and investment; where protection was high, the ...read more.