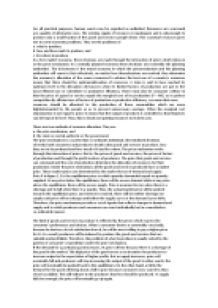 Price mechanism allocates a country's resources efficiently. Do you agree?

﻿For all practical purposes, human wants may be regarded as unlimited. Resources are scarceand are capable of alternative uses. The existing supply of resources is inadequate and is onlyenough to produce only a small fraction of the goods and services people desire. This scarcityof resources gives rise to some economic problems. They are the problems of a. what to produce, b. how and how much to produce, and c. for whom to produce. In a free market economy, these decisions are made through the interaction of prices which isknown as the price mechanism. In a centrally planned economy these decisions are reachedby the planning authorities. The in-between is the mixed economy in which the pricemechanism and the planning authorities will come in. But collectively, no matter how thesedecisions are reached, they determine the economy's allocation of the scarce resources.To achieve the best use of a country's resources means that there should be optimumallocation of resources. A state is said to have reached its optimum level in the allocation ofresources when its limited factors of production are put to the most efficient use or whenthere is productive efficiency. There must also be consumer welfare in that the price of agood or service equals the marginal cost of its production (P = MC) as in perfect competition.By efficient use of factors of production or productive efficiency, we mean that more resources should be allocated to the production of those commodities which are more highlydemanded by the people so as to prevent unnecessary wastage. ...read more.

As a result, producers will be induced to produce the goods and services that are saleable and profitable. Therefore, the problem of what to produce is usually solved by the pattern of consumer's expenditure under the price mechanism. If the demand for a particular good increases, its price will rise because there is a shortage of the good in the market. This high price of the good serves as an incentive for producers to increase output in the expectation of higher profits. But as supply increases, price will eventually fall and producers will stop increasing the output of the good. In other words, the price will eventually be pushed back to the equilibrium. On the other hand, a fall in the demand for the good will bring about a fall in price because consumers now want less than what is available. This will indicate to the producers that less should be produced. As supply falls low enough, the price will eventually go up again. In addition, productive efficiency and resource prices also influence what and how much to produce. With the profit motives of the producers, they will select the lowest possible cost of production so that not more than necessary resources are used. Goods that can be produced most efficiently and sold cheaply will enjoy a relative large share of the market. Changes in the resource prices will change the production costs, demand and output of the good. ...read more.

Thus, the market forces of demand and supply do not take into account social costs which may exceed private costs. The price mechanism will only work smoothly on certain assumptions: when there is perfect competition with factor mobility and flexible prices. It is only with the perfect competition that we are able to have factor mobility and flexible prices. The monopoly power creates market imperfections by preventing enough resources from moving in response to the market signals of high profits. It also controls prices and prevents the market from having flexible prices. Sometimes, producers may not know the cheapest method of production and inefficiency prevails. The first condition of economic efficiency is that whatever output the firm selects must be produced at the lowest possible cost of producing that level of output. Otherwise more resources will be used for this output than are necessary. Prices of the goods must be equal to the marginal cost of producing it. In this way, consumer's welfare is maximised. Firms do not necessarily produce in response to consumers' demand but through advertising may induce demand. Advertising has two major aspects: it seeks to inform consumers of the available products and it seeks to influence consumers by altering their demand. The first aspect, informative advertising, plays an important part in the efficient operation of any free market system; the second aspect is one through which firms seek to control the market rather than to be controlled by it. ...read more.