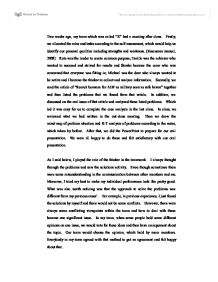 Two weeks ago, my team which was called "X" had a meeting after class. Firstly, we allocated the roles and tasks according to the self-assessment, which would help us identify our personal qualities including strengths and weakness. (Resources manual, 2008) Kate was the leader to create common purpose; Tenille was the achiever who wanted to succeed and strived for results and Stanko became the carer who was concerned that everyone was fitting in; Michael was the doer who always wanted to be active and I became the thinker to collect and analyze information. Secondly, we read the article of "Recruit bonanza for ADF as military seen as safe haven" together and then listed the problems that we found from that article. In addition, we discussed on the real issue of that article and analyzed these listed problems. ...read more.

As I said below, I played the role of the thinker in the teamwork. I always thought through the problems and saw the solutions activity. Even though sometimes there were some misunderstanding in the communication between other members and me. Moreover, I tried my best to make my individual performance look like pretty good. What was also worth noticing was that the approach to solve the problems was different from my previous cases'. For example, in previous experience, I just found the solutions by myself and there would not be some conflicts. However, there were always some conflicting viewpoints within the team and how to deal with these became one significant issue. In my team, when some people held some different opinions on one issue, we would vote for these ideas and then have an argument about the topic. ...read more.

I considered my English skill was improved and I could express myself clearly. One of the most important things was that I understood the team spirit deeply, which was high reliability and attribution, trusting members of the team, kind and friendly, sharing the opinions and communication was still needed. (Li, 2010) Through the teamwork studying, I understood the team spirit was very important in the working process. Moreover, I got some communication skills to work with my team members easily. In addition, I would like to share my opinions and happiness with others activity. That might help me to find a satisfactory job in the future and get along with others. Reference List Li, J 2010, Record daily life, 163 blog, China, viewed 18 April 2010, <http://southarea.blog.l63.com> Resources Manual, 2008, Self assessment, Victoria University, Melbourne, viewed 18 April 2010, <http: //www.uclan.ac.uk/facs/class/cfe/eggs/selfassessment.htm> ...read more.