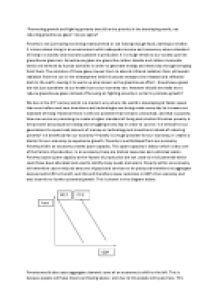 Promoting growth and fighting poverty should be the priority in the developing world, not reducing greenhouse gases do you agree?

Transfer-Encoding: chunked ﻿?Promoting growth and fighting poverty should be the priority in the developing world, not reducing greenhouse gases? do you agree? Poverty is not just having not being malnourished or not having enough food, clothing or shelter. It is more about living in an environment with inadequate income and resources, where standard of living in a society and economic growth is precluded. It is a huge threat to our society just like greenhouse gases are. Greenhouse gases are gases like carbon dioxide and carbon monoxide which are emitted by human activities in order to generate energy and electricity through bringing fossil fuels. The emission of these gases causes them to absorb infrared radiation from ultraviolet radiation from the sun in the stratosphere and this causes energy to be released and reflected back to the earth causing it to warm up also known as the greenhouse effect. Greenhouse gases are not just a problem to our health but to our economy too. However should we really try to reduce greenhouse gases instead of focusing on fighting poverty in order to promote growth? ...read more.

This is because people will have lower purchasing power, and due to this people will spend less. This reduction in spending and as consumption is a component of aggregate demand the aggregate demand curve will therefore shift to the left. Reduction in demand will also trigger many negative effects, such as unemployment and lower investment; which are also withdrawal from the circular flow of income. Reduction in demand mean that firms and businesses will have excess supply due to reduced consumption. This will cause firms and businesses to try and reduce their production costs by reducing labour. This will cause an economy to suffer unemployment and therefore spare capacity. Spare capacity will also cause the Production possibility frontier to shift to the left leading to lower economic growth and lower GDP. This is shown in the diagram below. Reduced demand can also reduce investment within and economy, this is because firms and businesses would avoid expanding or starting a new business when there is lower demand and this will prohibit potential economic growth. ...read more.

However it can also be argued that reduced prioritisation on greenhouse gases can create dangerous consequences for not just our economy but out world too. Greenhouse gases can create global warming which will then cause natural disasters to occur such as ice caps melting, sea levels rising, volcanic eruptions and floods. This in the longer term will affect our economy and drastically reduce economic growth and may even cause slump phase to arise in the economic cycle. This is because natural disasters can destroy the factors of productions, which means that resources to make goods and services will be lost such as labour and land, and in order to recover these resources lots of money will be spent on treatments and rebuilding land. However I believe that in order to reduce these greenhouse gases many actions are being taken, by not just the UK government but by many countries such as the EU. This is through the Kyoto Protocol, which is an international agreement by countries that have signed up and have committed to reduce their greenhouse emission within a certain period of time. ...read more.