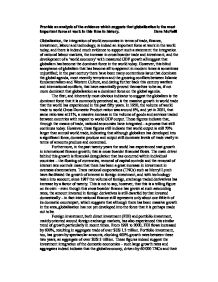 Provide an analysis of the evidence which

Provide an analysis of the evidence which suggests that globalisation is the most important force at work in this time in history. Dave McNeill Globalisation, the integration of world economies in terms of trade, finance, investment, labour and technology, is indeed an important force at work in the world today, and there is indeed much evidence to support such a statement: the integration of national labour markets, the increase in cross boarder trade and investment, and the development of a 'world economy' with measured GDP growth all suggest that globalism has become the dominant force in the world today. However, this blind acceptance of globalism that has become all to apparent in modern times is sometimes unjustified; in the past century there have been many contentious issue that dominate the global agenda, most recently terrorism and the growing conflicts between Islamic fundamentalism and Western Culture, and dating further back this century warfare and international conflicts, that have essentially proved themselves to be as, if not more dominant that globalisation as a dominant force on the global agenda. ...read more.

has grown at such astounding rates, the amount invested in foreign derivatives is still dwarfed by that invested domestically - in fact international finance still represents only about one fiftieth of its domestic counterpart, which suggests that although there has been massive growth in the area, globalisation has not yet developed into the force that it is perhaps made out to be. Foreign investment, both direct investment (FDI) and portfolio investment, mainly oriented around foreign exchange markets, has also experienced this similar trend of growth particularly in recent times. From 1991 to 2000, FDI flows increased by 600%, resulting in aggregate trade of over $US 1.2 trillion. Portfolio investment, too, has grown by spectacular amounts, clocking 400% growth rates between these two years, an aggregate of over $US 3 trillion. These figures indeed suggest the investment integration of the domestic economies - such large growth rates and aggregates indeed indicate that the global economy, driven by 60 000 TNCs and their 800 000 affiliates world wide, is becoming increasingly an omnipotent force on the international agenda. ...read more.

War, too, has been a deciding force in history. From the very start of mankind conflict has been part of our society, yet it was only this century that saw war on the scale that in which millions of people can die in half a year of combat. The First and Second World Wars, to mention but the most significant, have indeed changed many perspectives on the world today, and still play an important part in everyday life. Thus, although globalism is indeed a very important force in the world today, it is definitely not the most important force in history. Huge growth rates have been experienced in the indicators of globalisation - trade, foreign investment and international finance, in combination with the emergence of a truly global economy, and these figures indeed indicate that globalism is a very important and dominant force in the world today. However, war, driven by human greed and self interest, has certainly dominated international affairs over the past century, and thus globalism, although an important force, is certainly not the most important force in history. ...read more.