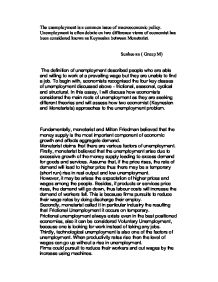 Reasons for unemployment and the main economic theories explaining it.

The unemployment is a common issue of macroeconomic policy. Unemployment is often debate on two difference views of economist has been considered known as Keynesian between Monetarist. Sunhee an ( Group M) The definition of unemployment described people who are able and willing to work at a prevailing wage but they are unable to find a job. To begin with, economists recognised the four key classes of unemployment discussed above - frictional, seasonal, cyclical and structural. In this essay, I will discuss how economists considered the main roots of unemployment as they are seeking different theories and will assess how two economist (Keynesian and Monetarists) approaches to the unemployment problem. Fundamentally, monetarist and Milton Friedman believed that the money supply is the most important component of economic growth and affects aggregate demand. Monetarist claims that there are various factors of unemployment. Firstly, monetarist believed that the unemployment arise due to excessive growth of the money supply leading to excess demand for goods and services. ...read more.

If reduce the rate of growth money supply it will gain low inflation, without leading to long-term unemployment. In addition, the government intervention and high tax can causes of disrupt to motivating investment and build business to private companies or individuals. < Minimum wage legislation > To simplify the diagram, A minimum wage of OF is bring to higher labour wage rates in this diagram. However, AB workers will lose their jobs because the equilibrium point more lower than their wage, also a total unemployment on AC will going to be increase. Keynes, Keynesian economist, they are inconsistent with classical beliefs that markets create full employment by invisible hand. We can assume that, if prices and wages do not adjust and if the classical model doesn't work then how can we reduce unemployment. Consequently, Keynesian proposed that increasing the economy's aggregate demand was the solution to this problem. In this view, the Keynesian principles were emphasized the intervention (i.g. ...read more.

<The Keynesian view on Unemployment> The effect of fiscal policy is determined by the amount of employment in the economy. In the figure of output below OB, expansionary fiscal policy can increase real out the higher demand leads to the increase in supply. Subsequently, the number of job is increase and creates employment. In conclusion, the main stand of the Keynesian - monetarist controversy centered on the determinants of aggregate demand. As I mention that, the monetarists were related primarily to argue that monetary factors which the growth of money supply and they treated as under the interest rates. In addition, monetarist contend that the unemployment might would be the result in Frictional unemployment temporary (it can be considered Voluntary unemployment ) and Technological unemployment. The Keynesian on the other hand were believes high autonomous expenditures (government expenditure or investment) and tax rate policy. In view, Keynesian strongly argued that fiscal policy is the main component of the aggregate demand. Furthermore, Cyclical unemployment and Structural unemployment both may bring the causes of unemployment in the Keynesian view. ...read more.

This essay engages superbly with the question, exploring economic theories beyond the A-Level syllabus. The diagrams don't seem to have transferred, but through the following sentences explaining them I can only assume these are correct. The essay is able to ...

This essay engages superbly with the question, exploring economic theories beyond the A-Level syllabus. The diagrams don't seem to have transferred, but through the following sentences explaining them I can only assume these are correct. The essay is able to look at the textbook types of unemployment: structural, frictional, cyclical and seasonal and then impose a critical voice using Keynesian and Monetarist theories. I was very impressed with this angle!

The analysis in this essay is sound. The diagrammatical analysis is good, with there being clear reference to the shifts of curves to show a strong understanding. Sometimes the essay doesn't stay focused, where simply analysis is what was required. For example "Another concern is the factors of unemployment that Structural unemployment occurs when workers have insufficient skills demanded by employers from changes structural in an industry." has the right idea, but the syntax of the sentence makes it seem that they don't understand. There is potential when the essay says "Keynes argued" or "it is argued" as it shows multiple interpretations, yet the backbone analysis isn't always there. It is as simple as stating that a reduction in aggregate demand causes an increase in unemployment, but this essay seems to go about explaining this in a long way. I must stress the necessity in a logical and clear argument!

The essay has a somewhat jumbled structure. The introduction is clear, but there are multiple conclusions. Sometimes a paragraph consist of one sentence, which shows a lack of understanding and the inability to expand on a point. A clear structure is set up in the paragraph, yet not followed. If I was doing this essay, I would have a paragraph for each cyclical, structural, frictional and seasonal unemployment and explain the causes. Then, I would have a paragraph or two explaining the difference in schools of thought towards unemployment. Some sentences make no sense whatsoever such as "Secondly, monetarist called it in particular industry the resulting that Frictional Unemployment it occurs on temporary." which could easily be sorted with a proof read! Unfortunately some of these sentences really detract from the quality of the analysis, as it suggests this essay doesn't have a strong understanding.