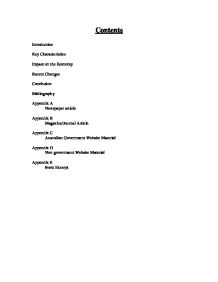 Contents Introduction Key Characteristics Impact on the Economy Recent Changes Conclusion Bibliography Appendix A Newspaper article Appendix B Magazine/Journal Article Appendix C Australian Government Website Material Appendix D Non-government Website Material Appendix E Book Excerpt Introduction Workplace relations play a very crucial role within the Economy of Australia. The IR or industrial relations system various laws and procedures have been established to organise workplace relations. Industrial relations concentrate on determining the process of setting wage levels and resolving conflicts within the labour market. This report will effectively display key characteristics, impacts and contemporary changes of Workplace Relations. Key Characteristics An important part of Workplace Relations is Wage setting. Industrial relations allow three ways to set the wage level of employees. Firstly the collective enterprise agreement Is a very consistent form of wage setting. These agreements are negotiated between employers and the employees. Secondly there are AWAs or awards which state the minimal standards that must be follow by employers. Lastly there are also individual contracts which are discussed and negotiated by the employer and the employee. These are classified as Common-law Contracts under the Workplace Agreements. The effectiveness and success of these wage determination systems greatly impacts on labour. Australia depends on a skilled labour force that is flexible to change and redeployment in the economy. ...read more.

to 2.5% p.a. This again supports the faster GDP growth of Australia to the United States. In Appendix A we see inflation is also vulnerable due to workplace relations. Essentially if the wage level increases from wage setting, spending will increase which would theoretically lead to higher inflation. This newspaper article from the Financial Review "Union Wage Claim Threat to Employers" discusses the important issue of rasing the minimal wage against then pressure of inflation. According to Peter Anderson (Australian Chamber of Commerce and Industries' director), "inflation had moderated and if the commission is inclined to award an increase, then it should be moderate and it should not apply within 12 months of the precious increase."4 However not all Australians are on AWAs. These graphs of Appendix D depict a comparison of some sorts between wage rates and inflation. These Wage price and CPI graphs in recent trends tend to fluctuate around the same quarters of growth. This is evidence of a link between the price of wages and inflationary pressures. However wages are not the only issue which affects inflation. Therefore the government must manage industrial relations to control the effects on inflation. 5 Recent Changes With the election of the Liberal Party there have been drastic changes to the Labour market. Due to the Liberals support of businesses in Australia many changes have been made to more directly benefit the employers and business owners in Australia. ...read more.

On the short-term, though, Work Choices looks at smoothing out the fluctuations of the business cycle especially by controlling key economic indictors such as inflation. One such way of doing this is through the AFPC. The Australian Fair Pay Commission (AFPC) sets and adjusts the minimal wages and casual loadings for employees. As seen in Appendix C, it is an independent, statutory body "established under the 'Workplace Relations Amendment (Work Choices) Act 2005' on the 14th December."9 This commission replaced the Australian Industrial Relations Commission (AIRC) Safety Net, though the AIRC still retains the role of dealing with employment disputes. The AIRC safety net did not immediately apply to all awards, first needing the confirmation of the trade unions before they were applied. The APFC on the other hand does not need this approval, and their decision is immediately effective across the board. Also with the AFPC, minimal pay can be set that would benefit the economy in general, looking at figures such as inflation and unemployment, rather than just benefiting the workers and looking at employee/employer relations. It is through the APFC that the government are trying to smooth out the fluctuations of the business cycle that were not addressed by the old system. Conclusion In conclusion it can be seen that Workplace Relations affect the economy as a whole. Workplace Relations is a contemporary issue which affects the relations between employers and employees as well as wage levels which have can effect on the Economy of Australian. ...read more.