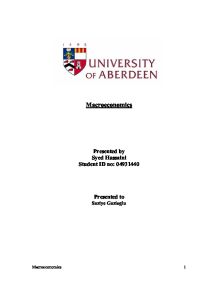 Macroeconomics Presented by Syed Hussaini Student ID no: 04931440 Presented to Saziye Gazioglu Running The British Economy Introduction A study of economics in terms of whole systems especially with reference to general levels of output and income and to the interrelations among sectors of the economy is called macroeconomics. Macroeconomics is concerned with the behavior of the economy as a whole-with booms and recessions, the economy's total output of goods and services and the growth of output, the rates of inflation and unemployment, the balance of payments, and exchange rates. Macroeconomics deals with the increase in output and employment over long period of time-that is economic growth-and with the short-run fluctuations that constitutes the business cycle. Macroeconomics focuses on the economic behavior and policies that effect consumption and investment, trade balance, the determinants of changes in wages and prices, monetary and fiscal policies, the money stock, the federal budget, interest rates, and national debt. In brief, macroeconomics deals with the major economic issues and problems of the day. In this software of running the British economy we will observe different outcomes in the British Economy by changing these four variables. They are 1. Government Expenditure 2. Tax Rate 3. Value Added Tax (VAT) 4. Monetary Cash Flow Through this assignment I have given a chance to run the British Economy for five years. ...read more.

By this general production level in the country increased and exports increased from 126 to 131. Because of the increase in the economic activity, revenue for the tax also increased from 151 to 159. But this thing as a very bad effect on unemployment which increased from 6.47 to 9.17. This happen because of the inflation because as we know from the Phillip model if inflation will decrease unemployment will increase. Phillips Curve Through this diagram we can easily understand when inflation (?) increases from 0 to ?1 by this unemployment decreases to U1. And when inflation decreases to ?2, unemployment increases to U2. It happens here in this practical. Inflation went in minus and unemployment increases, because inflation in minus means less profits for the manufacturer, so they will reduced production and by this unemployment increased. So in my case in year 6, inflation went on -2.00 and unemployment got up at 9.17. Year 7 In year 7, I increase the government expenditure in order to increase the real output, because as we know for IS-LM curve analysis if we increase the government expenditure then IS curve will move upwards on right side and will find new equilibrium on LM curve and by this income and out put will increase. We can understand this from this diagram. So in year 7 Y reached at 408. ...read more.

This year expected output was 496, but real output goes up to 502. Inflation also went up to -1.17, unemployment decreases and reached at 5.33. But capital inflow went down on -1.00, and this is not good for the economy. For next year I have to increase the inflation with a very small ratio so that people must not get disturb and investors keep their interest in the British market. Because that in turn will decrease the unemployment which is on 5.33. So my focus for the next year will be to increase the economic activity, and to keep the incentive for the investors in the British market, and also to decrease the unemployment. Year 10 This year I increase the government expenditure and make it 7.00 which is too much, I did this decision because my this year country's budget is in surplus, so I thought to increase the economic activity, because this thing in turn will reduce the unemployment, which happened and it unemployment reached at 4.62, which is alright. Inflation went up to 2.27, so that investors must not lose their interest in the British market. And this year there is a sufficient increase in the wage rates, which are 6.79. And by this all economy get a boast. People started getting better off and government got success keeping the interest of investor in economy. Balance to payment went down to 5, which is not bad. ...read more.