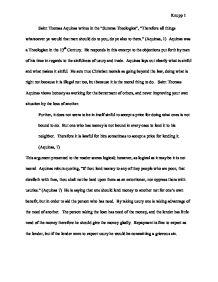 Saint Thomas Aquinas writes in the &quot;Summa Theologica&quot;, &quot;Therefore all things whatsoever ye would that men should do to you, do ye also to them.&quot;

Saint Thomas Aquinas writes in the "Summa Theologica", "Therefore all things whatsoever ye would that men should do to you, do ye also to them." (Aquinas, 1) Aquinas was a Theologian in the 13th Century. He responds in this excerpt to the objections put forth by men of his time in regards to the sinfulness of usury and trade. Aquinas lays out clearly what is sinful and what makes it sinful. He sets true Christian morals as going beyond the law, doing what is right not because it is illegal not too, but because it is the moral thing to do. Saint Thomas Aquinas views honesty as working for the betterment of others, and never improving your own situation by the loss of another. Further, it does not seem to be in itself sinful to accept a price for doing what ones is not bound to do. But one who has money is not bound in every case to lend it to his neighbor. Therefore it is lawful for him sometimes to accept a price for lending it. (Aquinas, 7) This argument presented to the reader seems logical; however, as logical as it may be it is not moral. ...read more.

That act is sinful because the person purchasing for you would instead purchase from the original, cheaper place if they knew of it. So by this tactic one is making a profit due to another's ignorance, this is clearly a sinful act. Another manner in which trade could be considered moral is if the profit gained was only enough to support the trader. Aquinas states: Thus, for instance a man may intend the moderate gain which he seeks to acquire by trading for the upkeep of his household, or for the assistance of the needy: or again, a man may take to trade for some public advantage, for instance, lest his country lack the necessaries of life, and seek gain, not as an end, but as payment for his labor. (Aquinas, 6) However, in regards to the clergy Aquinas considers trade to by sinful; not because of the act, but because of the possible temptations for sin that trade allows. So Aquinas' basic view of trade is that one may engage in trade as long as that activity does not harm or take advantage of another. When selling a good that is defective, or worth less than it actually appears to be worth one must inform the customer. ...read more.

Or Aquinas could simply mean that usury is beneficial to those who partake in it, and those individuals are often men of power and influence who would be loath to allow their lucrative business to come to an end. Thomas Aquinas' philosophy is very simple. He believes that everyone should work for the betterment of everyone else, and for their own continued existence. Due to this view he proscribes a view of honesty that forces people into working for the common good. Trading, which inherently divides the population between the haves and the have nots, needs to be controlled for the betterment of all. Aquinas is attempting to civilize and Christianize Europe by putting forth a definition of honesty that makes taking advantage of another sinful. Since misrepresenting a good's worth is sinful a merchant can't take an uninformed person's money. Usury is sinful; therefore making money by using your advantage of money is also impossible. Aquinas seems in many ways to be advocating a type of socialism wherebye everyone is on an equal economic level based on honesty and fairness in business. Taking advantage of another and benefiting by their lack of knowledge or fortune truly is sinful, and Saint Thomas Aquinas can tell you why. Knupp 1 ...read more.