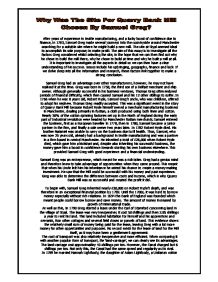 Samuel Greg chose this site because

After years of experience in textile manufacturing, and a lucky boost of confidence due to finance, in 1783, Samuel Greg made several journeys into the countryside around Manchester searching for a suitable site where he might build a new mill. The site at Styal seemed ideal to accomplish its sole purpose; to make profit. The aim of this essay is to investigate all the factors Greg considered whilst selecting the site, in the hope that we can then find out why he chose to build the mill there, why he chose to build at time and why he built a mill at all. It is important to investigate all the aspects in detail so we can then have a clear understanding of his success. Issues include his upbringing, geography, finance and luck. If we delve deep into all the information and research, these factors link together to make a strong conclusion. Samuel Greg had an advantage over other manufacturers, however, he may not have realised it at the time. Greg was born in 1758, the third son of a Belfast merchant and ship owner. Although generally successful in his business ventures, Thomas Greg often endured periods of financial difficulty, which then caused Samuel and his 12 other siblings to suffer. ...read more.

Once these gates were shut, water couldn't pass through. When they were open, water could then travel down to power the wheel. These gates could be controlled whenever the wheel needed to be operational. The second sluice gate was used to prevent flooding, as it released excess water back down into the reserve. A weir was also built at the waterfall in order to push some of the fast flowing water back. This consisted of raised stones at the top of the waterfall. The water that got passed the weir got collected into a reserve. From the reserve it then travelled into the man made channel and then down to the water-wheel. The water then tail races back to the river. These adaptations cost 5000 shillings, and the machines for the Mill itself cost 11000 shillings. Samuel Gregs loomshop at Eyam required a regular supply of good quality yarn to weave into cloth. He realised that he could control this supply of yarn by building his own mill. Produce was easily available at the time. IT was bought from the West Indies and America as part of the 'Triangular Trade'. ...read more.

The annual number of ships paying them, and the whole amount of the duties rose to a gradually increased proportion to the number of ships. Liverpools port was big enough to handle imports and exports. Luck was one of the most important factors. The location was perfect and cheap. His adoption helped kickstart his career by giving him the experience he needed. Nathaniels illness was important as he would never had got the experience with money and business if Nathaniel was well enough to do it himself. His marriage also brought him luck, as without her he wouldn't have the money available to pay for the adaptations. Finally timing helped Greg a lot, i.e: the end of the US War of Independence and all these lucky factors being present at the same time. In conclusion, I think Samuel Greg chose this site because luck was on his side and all the factors made it too good an opportunity to miss. However I think his upbringing and financial status were most important. If Greg was not brought up in the textile industry he may have never got involved or interested in the trade. Also, without his financial stability brought on from his inheritance and marriage, he may never have had the confidence to go ahead with his plans. ?? ?? ?? ?? ...read more.