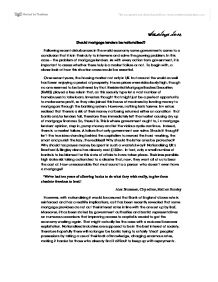 Should mortgage lenders be nationalised

Jan Hoang Xuan A6 Should mortgage lenders be nationalised? Following recent disturbances in the world economy some governments came to a conclusion that it is in their duty to intervene and solve the growing problem. In this case - the problem of mortgage lenders. As with every action from government, it is important to assess whether there truly is a market failure or not. To begin with, a closer look at how this situation arose would be essential. Over recent years, the housing market not only in UK but around the world as well had been enjoying a period of prosperity. House prices were ridiculously high, though no one seemed to be bothered by that. Residential Mortgage Backed Securities (RMBS) played a key role in that, as this security type let a vast number of homebuyers to take loans. Investors thought that might just be a perfect opportunity to make some profit, so they also joined this house of madness by lending money to mortgagors through the banking system. ...read more.

Moreover, it has been stated by government authorities and banks' representatives on numerous occasions that improving access to capital is crucial to get the economy working again. That might actually be the case with a reduced borrower exploitation. Nationalised industries are supposed to be in the best interest of society, therefore hopefully there will no longer be banks trying to unfairly 'steal' peoples' possessions by taking a use of their lack of knowledge, charging enormous rates, making it harder for those who already find it difficult to keep up with repayments. Government would be able to offer competitive deals for everyone, and with market forces coming in, other lenders would have to follow the trend as well. It is the period of nationalising that needs to be taken into consideration, too. United Kingdom Chancellor of the Exchequer, Alistair Darling, emphasised that this process in regards of Northern Rock is only on a temporary basis, yet still it would be more realistic to count in years rather than months instead. ...read more.

They wouldn't bear all the consequences. Northern Rock and Bradford & Bingley did not. Where is the capitalistic ideology of laissez-faire? Just leave it alone. Events should take their own courses, whereas government generally ought not to intervene in the marketplace. Looking at the situation in a more positive light though, financial conditions will improve in few years time, and by then the Government will be able to sell banks for much more attractive prices (e.g. Virgin trying to buy Northern Rock, but the offer was too low in Government's opinion) in order to compensate and benefit taxpayers. Still, I am not really convinced with the view of governments nationalising mortgage lenders. As a free market economy supporter, I strongly believe that the market should be free of any governments intervention nor regulation, besides the minimum function of maintaining the legal system and protecting property rights. To finalise, I would like to quote a man, whose words cannot summarise my essay better, 'The nationalisation of Northern Rock is a disaster for the taxpayer, a disaster for this government and a disaster for our country.' David Cameron, Conservative leader ...read more.