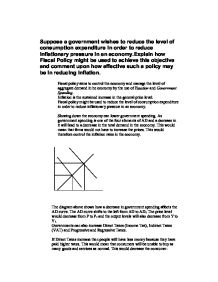 This would decrease the consumer-spending element of AD and therefore it would lead to a decrease in AD. This would stop a sustained increase in the general price increase. I.e. Inflation. If Indirect Taxes increased, then the price of a good will also increases. This means that consumers will be unable to buy the same basket of goods as they normally can because of the increase in price. If this were to happen, inflation would be stopped because the total demand of goods and services (AD) has decreased. In addition, as indirect taxes are taxes on spending, there would be an increase in inflation; therefore, it would be better to use supply side policies to reduce inflation in the end. ...read more.

If we consider the classical economists view on contractionary fiscal policy, where there is a tightening of fiscal policy, then output would not be affected due to the vertical LRAS curve, however there will be changes in the price level. The shift to the left in the AD curve, due to decreased consumer spending shows, according to classical economists that there will be a decrease in inflation in the long run, and the output will remain constant. The Keynesian economists view of contractionary fiscal policy can be shown below. The Keynesian view suggests that at, full employment, a decrease in AD, from AD to AD1 will lead to a fall in the price level and hence reduce inflation, however there will be no effect on Real GDP. However if there are unemployed resources within the economy the only effect a reduce in AD would have would be a decrease in output. ...read more.