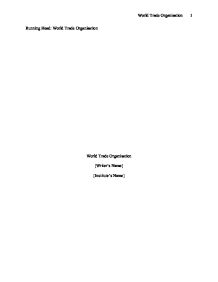 The World Trade Organisation is a global entity that is responsible for creating and regulating different statutes and policies for trading of goods and services on international level.

Running Head: World Trade Organisation World Trade Organisation [Writer's Name] [Institute's Name] World Trade Organisation Introduction The 'World Trade Organisation' is a global entity that is responsible for creating and regulating different statutes and policies for trading of goods and services on international level. According to the BBC (2011), "the World Trade Organisation is an international body whose purpose is to promote free trade by persuading countries to abolish import tariffs and other barriers. As such, it has become closely associated with globalisation. Their mission is to help firms and producers of goods and services, importers and exporters improve their profit." Advantages WTO has a number of benefits. Firstly, WTO's trading system encourages peace between nations. In particular, when nations carry out trading with each other without any conflict, they subsequently resolve a number of trading issues and build long-term relationships. This leads to the creation of peace between them. In addition, the trading system also forces enhancement of confidence and teamwork between nations. For example, earlier, people who sell products and services used to hesitate due to trade disputes with their international customers. However, after WTO, the trading has now become a smooth process, and both the seller and the buyer are satisfied with the exchange, leading to a good relationship. ...read more.

In the result, local companies are also trying to improve their products and services due to increase in trade due to WTO. For example, if an imported product or a service becomes successful in a country, then local companies would be putting more efforts to produce similar product or a service in a better price to prove to the local people that a home product is better than an abroad one. Therefore, competition is good for the business. Another advantage of the WTO is that it helps the economy to grow. This is beneficial for employment. For example, when countries trade with each other and local companies become multinational, it creates more jobs and increases profit. Moreover, it allows a company to expand and sell to different parts of the world. This helps to reduce the cost of products for local consumers and lower the number of unemployment. In addition, lowering trade barriers has always been good for employment. Disadvantages Besides benefits, WTO has a few drawbacks as well. It is an observation that WTO has been favoring developed countries more in comparison to developing countries, and thus, there has been dominance of rich countries in the WTO. ...read more.

It would also have to pay the full environmental cost of the fossil fuel it used. This would ensure that low-value, high volume goods, such as fruit and vegetables, would no longer be flown around the world. However, it would also ensure that the poor nations, which currently exports raw materials, would instantly become the most favored locations for manufacturing." Conclusion Despite drawbacks, the WTO has been an essential part to help the world economy to grow and influencing international trade. It is true that international trade deals with globalisation and helps the world to share trade and connect with each other. However, there are still some concerns over the unfair advantages for richer nations over the poor ones. Rich countries should have a policy or take actions to help poor countries to grow and develop. There should be an emphasis of fair trade between them. Companies should pay the environment back for the lands they have ruined or the air polluted by their factories. People should give back equally as much as they take. Rather than stealing or destroying because, we are all part of this world and it is either we all develop and live a comfort life or we would be suffering all from each other's actions. ...read more.