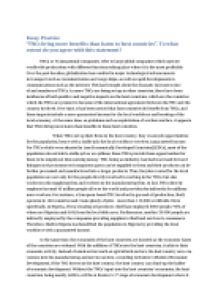 The benefits and harm caused by Transnational Companies.

﻿Essay Practice ?TNCs bring more benefits than harm to host countries?. To what extent do you agree with this statement? TNCs, or Transnational Companies, refer to large global companies which operate worldwide productions with different functions taking place where it is the most profitable. Over the past decades, globalization has resulted in major technological advancements in transport such as containerization and cargo ships, as well as rapid developments in communications such as the internet. This has brought about the dramatic increase in size of and numbers of TNCs. As more TNCs are being set up in other countries, there have been incidences of both positive and negative impacts on the host countries, which are the countries which the TNCs are present in because of the international agreement between the TNC and the country involved. Over time, it has been noticed that host countries do benefit from TNCs, and these impacts include a more guaranteed income for the local workforce and boosting of the local economy. At the same time, as problems such as exploitation of workers surface, it appears that TNCs bring more harm than benefits to these host countries. ...read more.

They are afraid to tell on their bosses during inspectors for they fear losing their jobs. Also, their bosses pay them extra wages if they present a good image of the company. Secondly, since these workers are extremely desperate for work, they put more priority on the amount of wages they receive rather than the working conditions they are subjected to in their work environment. Hence, it brings about a long-term negative effect to the host countries of the TNCs. The extent to which impacts due to TNCs affecting host countries leans towards the harms rather than benefits. Although more job opportunities are created for the local population in the host countries and overall, lead to a boost in the economy, these benefits of TNCs in host countries have indirectly brought harm to host countries. As more jobs are created for the local population, more people become employed and thus more workers are being exploited. They are hence trapped in a vicious cycle, unable to solve it. Hence, the overriding impact of TNCs in its host countries is the harm brought to it, the exploitation of labour. Therefore, the statement that TNCs bring more benefits than harms to its host countries is also agreeable to a limited extent. ...read more.