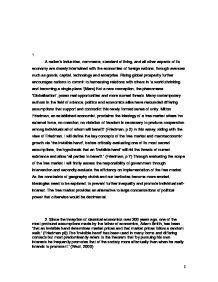 The Benefits of Trade

1 A nation's industries, commerce, standard of living, and all other aspects of its economy are closely intertwined with the economies of foreign nations, through avenues such as goods, capital, technology and enterprise. Rising global prosperity further encourages nations to commit to harnessing relations with others in 'a world shrinking and becoming a single place.'(Marx) Not a new conception, the phenomena 'Globalisation', poses real opportunities and more surreal threats. Many contemporary authors in the field of science, politics and economics alike have resounded differing assumptions that support and contradict this newly formed sense of unity. Milton Friedman, an established economist, proclaims the ideology of a free market where 'no external force, no coercion, no violation of freedom is necessary to produce cooperation among individuals all of whom will benefit' (Friedman, p 2) In this essay, siding with the view of Friedman, I will define the key concepts of the free market and macroeconomic growth via 'the invisible hand', before critically evaluating one of its most sacred assumptions, the hypothesis that an 'invisible hand' will rid the threats of current existence and allow 'all parties to benefit.' (Friedman, p 7) Through evaluating the scope of the free market I will firstly assess the responsibility of government through intervention and secondly evaluate the efficiency on implementation of the free market. As the constraints of geography shrink and our territories become more eroded, ideologies need to be explored, to prevent further inequality and promote individual self-interest. ...read more.

Through an approach that is sustainable yet equitable, international cooperation could also generate boundless positive impacts. The aim of this essay endeavors to shed light on the benefits of free trade in relevance to the current 'protectionist' policies imposed through government regulations. In reference to current literature procured through inconceivable means, furthermore I will challenge current political thinking and a***s the detrimental effect that regulations, namely subsidies, have toward developing countries' economic growth. The Benefits of Trade Through increased integration between nations, economies experience increased trade, capital and labor movements. Hill defines trade as: - 'A transaction involving the sale and purchase of a security; in general, the buying and selling of goods and services.' (p.166) People have traded with each other for centuries in order to overcome the local scarcity of resources. Scarcity, increased through consumption and an ever- growing populace, abets nations to seek globally as a means to feed their hunger. As this hunger grows, consumers awaken to the reality that goods can be produced more efficiently and cheaply elsewhere, and fosters choice and freedom. Recent developments have emphasized further positive gains from increased trade. These include; increased power and national influence; aid in promoting foreign policy and goals; cultural/social reasons and; economic development. Although numerous advantages arise as a result of more open trade between countries, governments see a need to protect industries in order to safeguard their reign of dominative power. As the trend leans more toward a more regulated and governed trade arena the envisaged future looks bleak for consumers as they are denied their sovereignty to choose. ...read more.