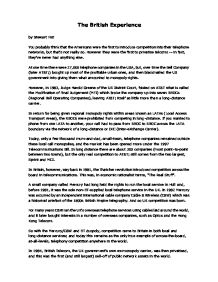 The British Experience by Stewart Fist You probably think that the Americans were the first to introduce competition into their telephone networks, but that's not really so. However they were the first to privatise telcoms -- in fact, they've never had anything else. At one time there were 27,000 telephone companies in the USA, but, over time the Bell Company (later AT&T;) bought up most of the profitable urban ones, and then blackmailed the US government into giving them what amounted to monopoly rights. However, in 1983, Judge Harold Greene of the US District Court, foisted on AT&T what is called the Modification of Final Judgement (MFJ) which broke the company up into seven RBOCs (Regional Bell Operating Companies), leaving AT&T; itself as little more than a long-distance carrier. In return for being given regional monopoly rights within areas known as LATAs (Local Access Transport Areas), the RBOCs were prohibited from competing in long-distance. If you wanted to phone from one LATA to another, your call had to pass from RBOC to RBOC across the LATA boundary via the network of a long-distance or IXC (Inter-eXchange Carrier). Today, only a few thousand mum-and-dad, small-town, telephone companies remained outside these local call monopolies, and the market has been opened more under the 1997 Telecommunications Bill. In long distance there are about 300 companies (most point-to-point between two towns), but the only real competition to AT&T; still comes from the two largest, Sprint and MCI. In Britain, however, way back in 1981, the Thatcher revolution introduced competition across the board in telecommunications. This was, in economic rationalist terms, "The Real Stuff". A small company called Mercury had long held the rights to run the local service in Hull and, before 1981, it was the sole non-BT-supplied local telephone service in the UK. In 1982 Mercury was acquired by an independent international cable company Cable & Wireless (C&W) ...read more.

Obviously Labour Party traditions are universal! Privatisation proved to be a boon for the UK telco executives, as it will in Australia from next year. The change in ownership has also substantially improved the life-style of a number of front-bench Conservatives who found places reserved for them both in the new BT and C&W. Lord Young, the champion of telecommunications privatisation when he was head of the Department of Trade and Industry (DTI) under Thatcher, is now the million-pound-plus chairman of C&W, while Lord Tebbit who took over the DTI from Young and pushed through the privatisation legislation, ended up on British Telecom's board. This old English tradition of finding jobs for out-of-work politicians is something that Australia sadly lacks. We prefer to insult our politicians with enforced idleness, cushioned only by exorbitant parliamentary pensions and free travel. But in the UK, ex-Tory front-benchers must go cap in hand and humbly ask for a job in the City, often with the companies that they helped to privatise. Fortunately, most of the privatised utilities have shown their compassion generously. The workforce in BT were not quite so fortunate. From a peak of 244,418 in 1990, the staffing levels dropped to about 130,000 at last count -- close to one in every two jobs disappeared. For comparison, over roughly the same period, Telstra's staff level rose from 70,000 in 1991, to 80,000 last year, and now, after some serious outsourcing decisions (IBM and Visionstream), it has dropped back again to 74,000. The British approach to regulating competition is also much more intrusive than Australia. The Bills now passing through our Parliament create a new telecommunications environment based strongly on laissez-faire theories of 'self-regulation' (an oxymoron). However, if you flick through back issues of the UK newspapers, between1981 and 1995, you'll find weekly stories about Oftel charging BT with "uncompetitive practices"; the Merger and Monopolies Commission threatening to take action; Mercury and BT in fierce legal battles before the Lords; etc. ...read more.

In mid-1995, Mercury had a serious crisis; it was over stretched and no longer able to maintain competition on all fronts. About 2,500 people left, including nearly half the executives, and Mercury sold or closed some of its operating divisions. It dropped completely out of the payphone business. But while Mercury is still BT's main competitor but with only seven percent of the staff. Mercury concentrated on local business connections and it exists today mainly on its international call profits. In mid-1995 BT wanted to buy Mercury/C&W's international operation, but the Mergers and Monopoly Commission insisted they sell the local loop operation, and the idea was quietly dropped. In recent times, Mercury and BT seem to have developed a closer working relationship -- facing a common enemy. When BT matched American transatlantic charges while raising local line rentals to compensate; Mercury quietly made the same price cut, but didn't complain to Oftel. There are also questions as to how BT and Mercury are able to offer special international tariffs at rates below those of the interconnect fee, which is the price other competitors need to pay to use just one part of BT's network. In management terms, there's no doubt that BT is a much better company. Over this decade it has managed to pay excellent salaries and dividends, and to stack up retained earnings to the point where it bought MCI, the second largest long-distance carrier in the USA, for nearly $7 billion. It is now busy rapidly expanding the Concert consortium around the world. So on an international competitive scale, one would have to say that the privatisation of BT was a success. But how did the public, left at home, fare in all of this? Well NUS International produces an annual comparative report on call charges, and generally the Oscar winner for "Highest Local Charges" is - you guessed it - British Telecom. The only regular challenge it seems to get is from Australia's Telstra - but maybe the voting's rigged. END Original Source: www.abc.net.au/http/sfist/ukexp.htm ...read more.