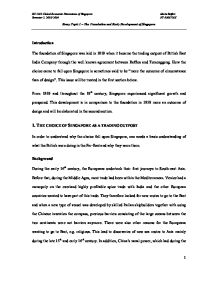 The choice of Singapore as a trading outpost

Introduction The foundation of Singapore was laid in 1819 when it became the trading outpost of British East India Company through the well known agreement between Raffles and Temenggong. How the choice came to fall upon Singapore is sometimes said to be "more the outcome of circumstance than of design". This issue will be treated in the first section below. From 1819 and throughout the 19th century, Singapore experienced significant growth and prospered. This development is in comparison to the foundation in 1819 more an outcome of design and will be elaborated in the second section. 1. THE CHOICE OF SINGAPORE AS A TRADING OUTPOST In order to understand why the choice fell upon Singapore, one needs a basic understanding of what the British were doing in the Far-East and why they were there. Background During the early 16th century, the Europeans undertook their first journeys to South-east Asia. Before that, during the Middle Ages, most trade had been within the Mediterranean. Venice had a monopoly on the overland highly profitable spice trade with India and the other European countries wanted to have part of this trade. They therefore looked for new routes to go to the East and when a new type of vessel was developed by skilled Italian shipbuilders together with using the Chinese invention the compass, previous barriers consisting of the large oceans between the two continents were not barriers anymore. ...read more.

As one might understand from this story, firstly EIC would probably not have established an outpost at all in the Straits of Malacca if Raffles' had not convinced them although they had some interest in a strategic outpost in the Straits. Secondly, that Raffles came to choose Singapore, was also much an outcome of circumstance considering he visited other locations before Singapore but could not have them. 2. THE SUBSEQUENT GROWTH OF SINGAPORE Of the three settlements of Penang, Malacca and Singapore, Singapore had become the capital of the three of them in 1836. From 1824 to 1873 the value of total trade in Singapore grew from USD 12 million to USD 56 million and the population grew about nine times. The main explanation for the growth is that Singapore developed into one of the foremost trading centers in the Southeast. This development was strongly linked with Singapore status as a free port. However, before Raffles turned Singapore into a free port, he took several actions in order to secure Singapore British and deepen the British rule as this was a prerequisite for being able to introduce free trade and expand Singapore into the strategic location of trade as was originally intended. ...read more.

Helped by the development of the steam-driven gunboat and with assistance from the Dutch and Spaniards, they together succeeded in rooting out piracy and securing the attractiveness of trading with Singapore. The process of industrialization in Britain during the first half of the nineteenth century, created an urgent need to sell abroad. The goods were sold through "agency houses", which were foreign merchants who sold on a commission basis. The industrial revolution resulted in technological development such as the steamships. Together with the opening of the Suez Canal in 1869 this further stimulated trade as it made traveling faster. The use of steamships also created a need for coal depots, as the ships needed refill regularly and Singapore became a coal depot between Europe and China. In 1870 Singapore was linked to the main trading counterparts in the West by telegraphy. This enabled goods to be sold and bought while being transferred across the oceans and further stimulated trade. To conclude, I would argue that the growth of Singapore during the early 19th century was more planned than the choice of Singapore as a location of EIC. The growth was more planned especially considering the actions taken by Raffles between 1819 and 1824 in order to secure Singapore as British in combination with establishing Singapore as free port, although other external factors also contributed to the growth. ...read more.