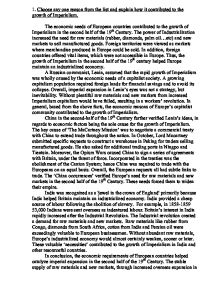 The economic needs of European countries contributed to the growth of Imperialism in the second half of the 19th Century.

There were numerous interlinked reasons for imperial expansion in China. The power supplied by The Industrial Revolution and the Western idea of 'progress through change' were Britain's motives for colonizing China. Moreover, Britain's sensations of culture superiority and her economic necessities were other reasons for overseas expansion in this area. Nationalism, or commonly referred to as 'pride in one's country', is deemed a predominant cause for imperialism in China. The British were proud of their country's achievements, which usually included taking over foreign territories. Therefore, influence and control over China heightened patriotism and loyalty amongst Britain's local population. In addition, it lessened the prospect of a civil uprising or revolution in Britain itself. As a result of Britain's growing patriotism, they appeared to regard themselves as the 'superior race' and viewed China's population as being inferior to their own. For example, signs outside restaurants were quoted 'No dogs, no Chinese people'. In consequence, Britain deemed that it was their obligation, as a dominant nation, to bring sensibility, western culture and industrialization to a 'barbaric', uncivilized country, like China. This concept is universally recognized as 'White Man's Burden' and was vital in the causation for imperial expansion in China Examples of Western influences are apparent by the influx of Christian missionaries, and the construction of Christian churches and railways in China, in order to promote their ethnicity. ...read more.

However, Britain's motives began to change. The Opium Wars and the unequal treaties China unwillingly signed, displayed Britain's contentment to hold a few ports and to dominate China commercially. After the Opium Wars, Britain gradually began to introduce social and religious reforms, due to their increased racial superiority. Examples of the reforms imposed on China are referred to in earlier paragraphs. In a nutshell, this illustrates how Britain's motives changed overtime. Initially, Britain's motives were to gain territory and trade, however with time, they then attempted to change the Chinese way of life (i.e. religion; from Confucian to Christianity) Chinese harbors were considered as reliable stations for coal refueling. These stations were vital to the operation of a powerful navy. Moreover, there were other strategic justifications to why European powers desired control over specific Chinese territories. For example, Japan and Russia conveyed immense interest in Korea because it had valuable mineral resources and Korea had access to Manchuria. Russia was also interested in Port Arthur because it gave them an ice-free port in the Winter. Overall, strategic positions in China were motives for imperial expansion in this area. To conclude, there were numerous motives behind imperial expansion in China. Feelings of nationalism and superiority evoked Britain's obligation to help inferior China become a dominant, 'civilized' nation. In addition, China's abundance of raw materials (i.e. silk and tea), its strategic ports and huge potential market intrigued Britain to want to gain these economic advantages. ...read more.