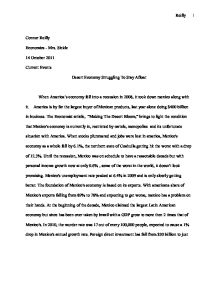 The Economist article, Making The Desert Bloom, brings to light the condition that Mexico's economy is currently in, restricted by cartels, monopolies and its unfortunate situation with America.

Connor Reilly Economics - Mrs. Sickle 14 October 2011 Current Events Desert Economy Struggling To Stay Afloat When America's economy fell into a recession in 2008, it took down mexico along with it. America is by far the largest buyer of Mexican products, last year alone doing $400 billion in business. The Economist article, "Making The Desert Bloom," brings to light the condition that Mexico's economy is currently in, restricted by cartels, monopolies and its unfortunate situation with America. When stocks plummeted and jobs were lost in america, Mexico's economy as a whole fell by 6.1%, the northern state of Coahuila getting hit the worst with a drop of 12.3%. ...read more.

At the beginning of the decade, Mexico claimed the largest Latin American economy but since has been over taken by brazil with a GDP grow to more then 2 times that of Mexico's. In 2010, the murder rate was 17 out of every 100,000 people, expected to cause a 1% drop in Mexico's annual growth rate. Foreign direct investment has fall from $30 billion to just half that over the last 5 years. With so many problems limiting Mexico's potential, the country needs to get everything in order to to revive itself from the current recession. ...read more.

Sales to latin America and asia are growing twice as fast as those to America. Mexico's largest export is the automotive industry, although its exports to America make up only 65%. Eduardo soils head of the industry's national association thinks this is a good sign because it always Mexico to establish markets in other countries, opening up more opportunities. His goal is to get it down to 50%. Others argue that Mexico can not become a "commodity exporter." just because countries like china have a demand for soy beans, doesn't mean that Mexico should start growing and export this product. They believe the economic future still lies in America's economy. They way out of the recession is to gain a bigger piece of America's slowly growing economy. Reilly Reilly ...read more.