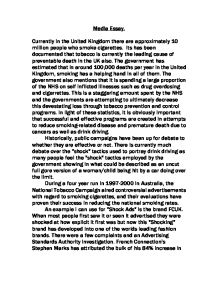 The effectiveness of advertising

Media Essay. Currently in the United Kingdom there are approximately 10 million people who smoke cigarettes. Its has been documented that tobacco is currently the leading cause of preventable death in the UK also. The government has estimated that in around 100,000 deaths per year in the United Kingdom, smoking has a helping hand in all of them. The government also mentions that it is spending a large proportion of the NHS on self inflicted illnesses such as drug overdosing and cigarrettes. This is a staggering amount spent by the NHS and the governments are attempting to ultimately decrease this devestating loss through tobacco prevention and control programs. In light of these statistics, it is obviously important that successful and effective programs are created in attempts to reduce smoking-related disease and premature death due to cancers as well as drink driving. Historically, public campaigns have been up for debate to whether they are effective or not. ...read more.

Consumers voted by buying 120,000 T-shirts bearing the slogan. French Connection has been transformed from a run-of-the-mill name to being a youth icon right up there with Sony, Nike and Tango. With its "Shock" tactics, f**k won campaign of the year. The UK government's 1998 white paper on tobacco promised that �60m would be spent over three years to set up smoking cessation services in the NHS and that these services would be backed up by an advertising campaign. The campaign-"Don't give up giving up"-was launched in December 1999. This initial �5m media campaign comprises posters and six weeks of television advertising; it offers tips on giving up, testimonials from people with smoking related diseases, and a video diary of nicotine addicts trying to quit. All the advertisements feature genuine smokers: there is not an actor in sight. The testimonials are particularly powerful. It would be surprising if the story of a 43 year old woman who died of lung cancer three weeks after filming didn't prompt many smokers to think again. ...read more.

It is possible that the most effective elements of "Shock" advertising can still be delivered well and perhaps even enhanced in effectiveness. Due to the large extent of human suffering and economic loss from things like smoking, drink driving and not wearing your seatbelt, it is important that the government take extreme measures to develop new types of campaigning to counteract the damage done. Extreme measures such as socking advertising can be expected to result in some controversy but in the end it will pay off due to the amount of money and lives saved. No matter the controversy, "shock ads" depend on the simple saying "their is no such thing as bad publicity". If everyone is talking about how controversial the advertisements are then surely how controversial the acts themselves are will somehow work its way into the conversation leading more and more people to believe that it is bad for you. ...read more.