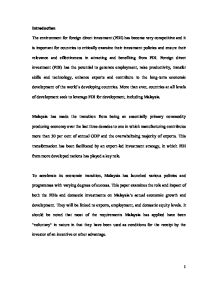 Introduction The environment for foreign direct investment (FDI) has become very competitive and it is important for countries to critically examine their investment policies and ensure their relevance and effectiveness in attracting and benefiting from FDI. Foreign direct investment (FDI) has the potential to generate employment, raise productivity, transfer skills and technology, enhance exports and contribute to the long-term economic development of the world�s developing countries. More than ever, countries at all levels of development seek to leverage FDI for development, including Malaysia. Malaysia has made the transition from being an essentially primary commodity producing economy over the last three decades to one in which manufacturing contributes more than 30 per cent of annual GDP and the overwhelming majority of exports. This transformation has been facilitated by an export-led investment strategy, in which FDI from more developed nations has played a key role. To accelerate its economic transition, Malaysia has launched various policies and programmes with varying degrees of success. This paper examines the role and impact of both the FDIs and domestic investments on Malaysia's actual economic growth and development. They will be linked to exports, employment, and domestic equity levels. It should be noted that most of the requirements Malaysia has applied have been "voluntary" in nature in that they have been used as conditions for the receipt by the investor of an incentive or other advantage. Research Methods To find data and information on FDI in Malaysia, as well as its role and impact on the economic growth and development, a lot of reading was done, namely of * Malaysia's economic policies since independence in 1957 * Malaysia International Trade and Industry reports * UNCTAD publications * Malaysian Industrial Development Authority (MIDA) reports * MIDA website (http://www.mida.gov.my) * Bank Negara Malaysia Annual reports of various issues * Multimedia Development Corporation website (http://www.mdc.com.my) * and other academic publications (listed in the bibliography) ...read more.

However, manufactured exports only displayed their rapid expansion after the mid-1980s. Furthermore, the exports of manufactures were heavily biased towards the electrical and electronics industry, which started to dominate manufactured exports during the 1980s. In 2001, that industry accounted for more than 70 per cent of manufactured exports. The increased exports, however, had a more limited positive impact on Malaysia's trade balance, as imports of capital and intermediate goods also expanded fast. It was only after 1997 that the trade balance improved significantly. The expansion of manufactured exports was closely correlated with a rapid increase in the volume of FDI approved. Of the FDI flows into Malaysia, the electronics industry accounted for a major part. As a result, Malaysia's share of world electronic components exports increased from almost nothing in 1970 to about 10 per cent in 2000. Meanwhile, export-oriented FDI was also received in textiles and apparel, wood and wood products, chemical and chemical product and rubber products. The creation of free trade zones and incentives contingent on exportation was important in this process but not the only determining factors. Foreign firms were also attracted by the availability of low-wage labour, reasonable infrastructure facilities and political stability. The export requirements and related incentives exerted their greatest influence on FDI in the electronics and textiles industries, which are not based on the presence of natural resources and are therefore more mobile. Over time, export manufacturing has moved beyond the free trade zones partly in response to incentives granted to encourage industrial dispersion. At the same time, it is difficult to assess how important the export requirements were in encouraging inward FDI. Exports may well have increased even without such requirements since most of the FDI came mainly to take advantage of lower costs precisely for exports to markets in the United States, Japan and Europe. For such investments, Malaysia was an attractive and profitable production site. ...read more.

Inward FDI in Malaysia has resulted in important technology transfers. This has been most visible in the electronics cluster in Penang, in which leading local supporting industries have managed to absorb and adapt to the high quality practices and standards applied by TNCs and the rapid technical innovation in the global electronics industry (for example, Rasiah, 1995; 1999). As a result, the most successful local supporting industries today fully comply with international standards and produce components, machinery and equipment for TNCs, not only in Malaysia but also elsewhere. Other studies report encouraging signs of technology taking root and of diffusion of expertise, more so in the Penang region than in the Klang Valley (Lai et al., 1994; Narayanan et al., 1997). The Malaysian policy has fostered rapid economic growth based on an expansion of manufactured exports. This has been paralleled by achievements in the social area, including a reduction of poverty, a more ethnically balanced industrial labour force and distribution of income. Conclusion The Malaysian case shows that FDI can play an important role in the process of economic and social development, and that government policies and institution-building efforts have a prominent function in this process. As a small economy, its desire to enforce strict requirements on investors entering the country had to be balanced against the risk of negatively affecting the attractiveness of the location. This has been a delicate balancing act. In Malaysia, the Government has been more than willing to be proactive. Beyond the desire to fulfill the country's development ambitions, it has been responsive to the needs and views of the private sector. In conclusion, in some ways, FDI has contributed towards the industrialization and growth of the economy and helped to realize the social restructuring objectives considered necessary for social and political stability. Still, in some parts of the Malaysian economy, the inflow of FDI has resulted in transfers of technology and the establishment of innovative activity. The export-oriented industrialization involving a continuous inflow of FDI and the generation of employment has been instrumental in transforming the economic structure of Malaysia into what it is today. ...read more.