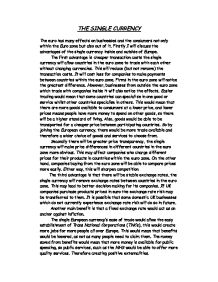 The euro has many effects on businesses and the consumers not only within the Euro zone but also out of it. Firstly I will discuss the advantages of the single currency inside and outside of Europe.

THE SINGLE CURRENCY The euro has many effects on businesses and the consumers not only within the Euro zone but also out of it. Firstly I will discuss the advantages of the single currency inside and outside of Europe. The first advantage is cheaper transaction costs the single currency will allow countries in the euro zone to trade with each other without changing currencies. This will reduce (but not remove) the transaction costs. It will cost less for companies to make payments between countries within the euro zone. Firms in the euro zone will notice the greatest difference. However, businesses from outside the euro zone which trade with companies inside it will also notice the effects. Easier trading would mean that some countries can specialise in one good or service whilst other countries specialise in others. This would mean that there are more goods available to consumers at a lower price, and lower prices means people have more money to spend on other goods, so there will be a higher standard of living. Also, goods would be able to be transported for a cheaper price between participating countries. So by joining the European currency, there would be more trade available and therefore a wider choice of goods and services to choose from. ...read more.

Training will need to be taken by employees, managers, and even consumers. Every government in and out of the eurozone will be affected by the costs of the transition. This task will require many hours of organization, planning, and implementation. The chance of economic shock is another risk that comes along with the introduction of a single currency. On a macroeconomic level, the objectives have been controllable in the past. In the past governments could adjust spending such as unemployment and social welfare programs. In times of economic difficulty, when more people are claiming benefits, the government's spending increases to make these payments. This puts money back into the economy and encourages spending, therefore taking them out of a recession. Because of the Stability and Growth Pact, governments are restricted to keeping their budget deficits within the requirements of the pact. This means they are limited to spending during economically difficult times, and therefore limiting them to pull the country out of recession. With their own currencies, countries could adjust interest rates so that people would invest more and buy on a larger scale. The euro will make interest-rate adjustments by individual countries impossible, so this form of recovery will be lost. ...read more.

High interest rates mean high returns, but they may also mean inflation. There is a fine line between these two, and investors have to balance the risks accordingly. The euro also affects the U.S. dollar. Euroland now has the second strongest economy in the world, and the highest level of world trade. This could establish the euro as a new reserve currency, and could cause a shift in demand from dollar-denominated markets to euro-denominated markets. Another factor that affects the balance of the business world is the fact that growing countries that are trading with Euroland countries will begin invoicing in euros. This will mean that these areas will be known as euro trading zones. A third factor that may strengthen the affects of the euro and impact worldwide business is the new freedom for expansion that Euroland manufacturers and other business firms now have. This growth opportunity will allow them to use economies of scale to their advantage and create highly competitive markets that didn't exist before the euro. While the euro may not help some of the problems within the Euroland countries themselves (such as unemployment). It will bring about an opportunity for growth that has not been possible in the past. It is anticipated by most that the euro will promote expansion and growth that will make European stocks as attractive to investors as others. ...read more.

****
This is a mostly accurate analysis of the effects of joining the euro. With the benefit of hindsight many more points could be made about how it has panned out in reality but this does not detract from this essay.