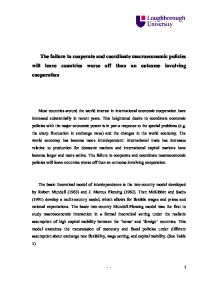 In the absence of direct cooperation, it is well known that the outcomes of such games are socially inefficient; there are alternative policies that would make all parties better off. The benefits of coordination can be illustrated at a basic level using the famous prisoner's dilemma game. (See Table 2)This game is described as static in nature because the game relates to the domestic country and foreign country each trying to set the optimal level of their monetary policy in response to an inflationary shock. (Hallwood and MacDonald, 2000) And the issues are illustrated in the following using a diagram developed by Hamada (1979). Table 2. The Prisoner's Dilemma and the Nash-Cournot Equilibrium Figure 1 illustrates the loss function of each country define a set of indifference curves as ellipses in m1 and m2 space. Suppose each country wishes to minimize a loss function of the form: The indifferent curves have their particular shape because of the potential spillover from country 1 to country 2. Complete policy independence for the two countries in the diagram by vertical straight-line indifference curve for the home country and the horizontal straight line for the foreign country. All the bliss points at which the indifference curves are tangential will represent the efficient, or optimal, policies for the two countries. Using this Nash reaction function may be illustrated for country 1 using the geometric argument in the diagram. ...read more.

Differences in objectives between countries affect the basic principle of gains from cooperation. The ongoing nature of policy interactions among countries, reputational considerations make cooperative equilibrium more likely. (Barro, 1986)Each country knows it will be better off in the long run if the cooperative equilibrium is maintained. Countries may develop strategies both to punish those that do not cooperate, and to earn a reputation for reliability. It then becomes possible that countries will reach and stay at the cooperative equilibrium. Coordination through reputation, without explicit international agreements, is less likely the more countries there are. When everyone is at the cooperative equilibrium, the temptation for one small country to break ranks is very strong. The potential cost to it of doing so may also be high, for it is more dependent on the world economy than is a larger country. But because it inflicts very little damage on the rest of the world by not cooperating, it is not certain that it will be penalized. Finally, in the absence of coordination, policies which rely on reputation may be undesirable. (Currie et.al., 1987) This is because the government which has reputation can more readily affect market expectations, and the coordination failures, especially those relating to the exchange rate, that arise from the noncoordination of policies are more likely to be increased when a government has reputation. From all above issues, which discussed on policy coordination, considering the game theory relating to the optimality of cooperative strategies, then, make a convincing case that coordination is generally superior to noncooperative policy-making. ...read more.