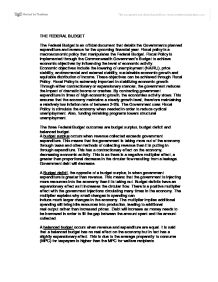 THE FEDERAL BUDGET The Federal Budget is an official document that details the Governments planned expenditure and revenue for the upcoming financial year. Fiscal policy is a macroeconomic policy that manipulates the Federal Budget. Fiscal Policy is implemented through the Commonwealth Government's Budget to achieve economic objectives by influencing the level of economic activity. Economic objectives include the lowering of unemployment (NAIRU), price stability, environmental and external stability, sustainable economic growth and equitable distribution of income. These objectives can be achieved through Fiscal Policy. Fiscal Policy is extremely important in stabilizing economic growth. Through either contractionary or expansionary stances, the government reduces the impact of dramatic booms or crashes. By contracting government expenditure in times of high economic growth, the economies activity slows. This ensures that the economy maintains a steady growth level, therefore maintaining a relatively low inflation rate of between 2-3%. The Government uses Fiscal Policy to stimulate the economy when needed in order to reduce cyclical unemployment. ...read more.

The multiplier implies additional spending will bring idle resources into production, leading to additional real output rather than increased prices. Debt will increase as money needs to be borrowed in order to fill the gap between the amount spent and the amount collected. A balanced budget occurs when revenue and expenditure are equal. It is said that a balanced budget has no real effect on the economy but in fact has a slightly expansionary effect. This is due to the average propensity to consume (MPC) for taxpayers is higher than the MPC for welfare recipients. The federal budget consists of two components. The budget has cyclical components which are a result of automatic stabilizers and structural components, where deliberate changes in revenue or expenditure are initiated by the government. When put in place, automatic stabilizers need no intervention from the government. They continue to work automatically in response to changes in economic growth, reducing fluctuations of the economy and boosting aggregate demand. ...read more.

The fiscal deficit is expected to fall from -54.8billion to -39.6 billion in 2010-2011 for these reasons. Tax receipts in this period is anticipated to grow by $33 billion, which should see Australia return to budget surplus in 2012-2013. This is a significant improvement on early last year when economic growth was negative and Australa was preparing for a recession. The Fiscal policy took on an extremely expansionary stance, injecting money into the economy through welfare payments, government subsidies and government funding. Although cyclical factors are contracting the economy, discretionary policy changes continue mild stimulation. This discretionary policy has been limited however, with the government has announced a 2% cap on real growth in spending until the budget returns to surplus. This is par of its process of fiscal consolidation. The main objectives of the FIcal Policy is to increase the level of infrastructure, improve education and increase the health sector of Australia. The 2010-2011 budget statement showed that 16% of government expenditure was going to improving the health system while another 9% was funding education systems. This shows that they are the main focuses of the discretionary component of the budget. ...read more.