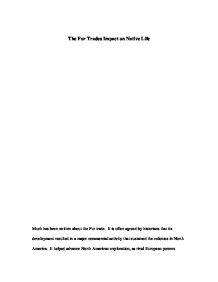 The Fur Trades Impact on Native Life Much has been written about the Fur trade. It is often agreed by historians that its development resulted in a major commercial activity that sustained the colonies in North America. It helped advance North American exploration, as rival European powers looked to take advantage of newly found suppliers. Not only did traders acquire furs from the natives, they acquired valuable knowledge and skills for survival in the wilderness, and extreme whether conditions, all of which helped to sustain the development of the colonies. Ray and Van Kirk offer a different approach in the study of the fur trade. Most historians have studied the development of the fur trade with a European perspective, that being, focusing on an egocentrism point of view (Ray, 2002, p52). Both Ray and Van Kirk explore the fur trade with an emphasis on its affect on native life. They utilize the availability of the vast amount of first hand documentation of the fur trade to further their point The focus of this essay will look to explore the similarities between Ray and Van Kirk and the development of the fur trade as it pertains to native life. ...read more.

The trader's response to these sanctions according to Ray was to introduce new commodities that the natives could easily transport and or consume. These commodities included alcohol and tobacco. Both of which (especially alcohol) had devastating effects of the native economy and their way of life. Sylvia Van Kirk offers the impact of the fur trade on native life with a native female perspective. She begins her assessment by stating that "it was a generally held opinion of the traders that the status of women in Indian society was deplorably low".vi Like Ray she proposes that the history of the Fur trade in Canada has taken on the perspective white European culture, and in doing so does harm to the sprit and history of native heritage. Van Kirk proposes that while the fur trade did offer short term advantages to native women, ultimately the impact of the fur trade had an "adverse effect on Indian women".vii In Van Kirk assessment, she lays forth the short term positive affects the fur trade had on native life. ...read more.

Lastly Van Kirk argues that the position of the mixed blood women became particularly vulnerable because in the attempts to assimilate into white culture, these women moved away from a position of autonomy and purpose which they enjoyed in native society, to a position of male dependency. In summary, though the two authors differ some what in their focus, as it has been shown Van Kirk is primarily concerned with the status of native women, this essay has looked to explore the similarities in the works of A. J. Ray and S. Van. Kirk, and in doing so has found a common trend in their research. The impact of the fur trade on native life according to both Ray and Van Kirk is misrepresented by many historians who have focused their research on European egocentrism, and stereotypical native imagines. Both Ray and Van Kirk argue that natives during the fur trade had as much to offer to the traders as they had to gain. They point out that the introduction of new technologies, commodities, and ways of living, resulted in a dependency of natives to Europeans which ultimately changed their traditional ways of life. ...read more.