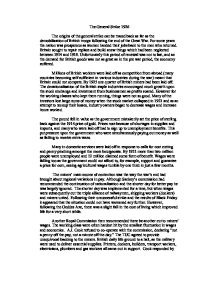 The General Strike 1926 The origins of the general strike can be traced back as far as the demobilisation of British troops following the end of the Great War. For some years the nation was prosperous as women handed their jobs back to the men who returned. Britain sought to repair replace and build anew things which had been neglected between 1914 and 1918. Unfortunately this period of renewal was not to last, and as the demand for British goods was not as great as in the pre war period, the economy suffered. Millions of British workers were laid off as competition from abroad (many countries becoming self sufficient in various industries during the war) meant that Britain could not compete. By 1925 one quarter of British miners had been laid off. ...read more.

By 1921 more than two million people were unemployed and 12 million claimed some form of benefit. Wages were falling too as the government could not afford to, for example, support and guarantee a price for corn, seeing agricultural wages tumble by one third in just a few months. The miners' main source of contention was the way the war's end had brought about regional variations in pay. Although Sankey's commission had recommended the continuation of nationalisation and the shorter day for better pay he was largely ignored. The shorter day was implemented for a time, but when wages were subsequently cut the triple alliance of railwaymen, shipping workers (dockers) and miners united. Following their unsuccessful strike and the results of Black Friday it appeared that the situation could not have worsened any further. ...read more.

Many professionals, who saw the strike as a class war, came out in support of Baldwin's government by volunteering to drive public transport buses and trains. There were battles between the police, strikers and the scabs. Yet after nine days, when the TUC could hold out no longer they capitulated. They wanted to ensure the government saw it not s a class war, which it was a fast becoming, but one of fair rights. Slowly, forced by their children's hunger and then need for heat and rent money, the miners were forced back to work. Yet for many they were forced to accept even lower wages, longer hours and worsened conditions. The large number of unemployed meant that many were replaceable, and thus their union status meant less than it previously had. However, in various industries where sympathy walkouts had been staged, such as amongst electric workers, wages remained the same for three years following at the same time as the price of living fell. ...read more.