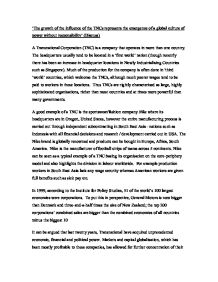 'The growth of the influence of the TNCs represents the emergence of a global culture of power without responsibility' (Discuss) A Transnational Corporation (TNC) is a company that operates in more than one country. The headquarters usually tend to be located in a 'first world' nation (though recently there has been an increase in headquarter locations in Newly Industrialising Countries such as Singapore). Much of the production for the company is often done in 'third 'world' countries, which welcome the TNCs, although much poorer wages tend to be paid to workers in these locations. Thus TNCs are rightly characterised as large, highly sophisticated organisations, richer than most countries and at times more powerful than many governments. A good example of a TNC is the sportswear/fashion company Nike where its headquarters are in Oregon, United States, however the entire manufacturing process is carried out through independent subcontracting in South East Asia - nations such as Indonesia with all financial decisions and research / development carried out in USA. The Nike brand is globally renowned and products can be bought in Europe, Africa, South America. Nike is the manufacturer of football strips of teams across 5 continents. ...read more.

6 This view coincides with that of Jacobs (2001) who claims 'to oppose globalisation is to deny people in poorer countries the benefits of knowledge, technological advance, cultural diversity and travel which we in the rich world enjoy.'7 However it can be argued that such technologies is not guaranteed to be used to its full capacity. For instance a country's comparative advantages increasingly lies in its ability to use effectively new technology, which is generally a function of the capacity of its population to absorb new technologies and incorporate them in the production process (Aharoni, 1991)8. However the introduction of technology may not necessarily help or serve the peoples needs as it may displace workers from jobs that already exist. At the end of the day TNCs are seeking for higher profits seeing the world as one conceptual global space, and is supported by the rapid development of technology in communication, transportation and production. Peter Dicken seems to express this point properly by saying that the TNC is arguably the most important single force creating global shifts in economic activity, and their strategies and operations are much influenced by the forces of technological change. ...read more.

economic activity, as well as hoping to see a reduction in unemployment rates, but is disapproved of by environmental campaigners and those who object to any change. The examples of South Korea illustrate the benefits of TNCs. However 'economic power of this magnitude will have fundamental effects on the global economy, polity and society.'14 It can be argued both countries and TNCs have interests in each other; the key solution is to find the agreement so that all the interests are satisfied. To make this possible it would be necessary a regulation from the international institutions, and that the action of local governments was efficient and democratic, through legislation, execution of laws. Bibliography Abercrombie N., et al, The Penguin Dictionary of Sociology: Fourth Edition, Penguin Books (2000) Bauman, Z. Globalisation: The Human Consequences, Polity Press (1998) Cohen, R & Kennedy P Global Sociology Macmillan, (2000) Chomsky, D. Democracy in a Neoliberal Order (1997) Dickens, P. Global Shift: Transforming the World Economy Sage (1998) Hall et al Modernity and its Futures, O.U.P (1996) Held, D. et al., Global Transformations, Polity Press (1999) Kiely, R. & Marfleet P. (ed) Globalisation and the Third World, Routlegde (1998) Jacobs M. Guardian Newspapers Limited 2001 Fox, J. Postmodern Encounters: Chomsky and Globalisation, Icon books (2001) Websites www.corporatewatch.org.uk www.globaleye.org.uk. www.globalisationguide. ...read more.