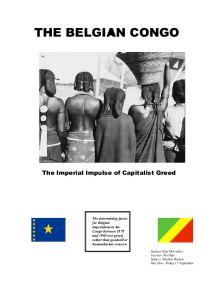 The Imperial Impulse of Capitalist Greed - THE BELGIAN CONGO

"The Belgian exploitation of the Congo was the single most murderous episode in the European seizure of Africa" (Hochschild, A, 1999). While the recollections of colonial history are scarred with tales of greed, subordination and exploitation, the New Imperialist age; the years between 1875 and 1914, are characterized by an almost-unfathomable mentality of profit through the exploitation of local peoples. The study of this New Imperialist mindset reveals tales of untold cruelty and oppression on a massive scale. The most notable imperial atrocity is that of the Belgian-controlled Congo Basin, a traditional society that was transformed into an arena for slavery and abuse through the hands of greedy and ruthless Belgian imperialists. The determining factor for Belgian imperialism in the Congo between 1878 and 1905 was greed, rather than goodwill or humanitarian concern. As colonialists raped and pillaged the African countryside, European diplomatic powers fought amongst one another to secure their respective share of the continent and Belgium, under the rule of the criminally indifferent King Leopold II, made clear its intention to "seize African territory and then rule the country as if there were no inhabitants" (Leopold, L, 1880). ...read more.

The Belgian government weaved a thin convenient theory of a race struggle in order to rationalize the subjugation of the Congolese people. These early years of Belgian rule in the Congo were only indicators of the horrors that were still to come as the Belgian colonialists succumbed to greed and further exploited the Congo nation. The Belgian exploitation of the Congo occurred on two levels, firstly, in the pillaging of the country for raw materials and cheap labour, and secondly, in the mistreatment of the native Congolese people. Economic motives were often regarded as the driving force behind the Belgian colonialist movement. The Congo promised Belgium cotton, silk, rubber, vegetable oils and the rarer minerals and metals, all of which could be had cheaply in the African society and then exported back to Europe to realise capital gains. As Hobson argues, "the imperial impulse was always one of capitalistic greed for cheap raw materials, advantageous markets, good investments and fresh fields of exploitation" (Hobson, A, 1902). The Congo Free State was, by its very nature, exploitative and abusive; the outcome of a new drive by Belgium which shattered mutual trade agreements which had previously existed. ...read more.

During the decades of King Leopold's rule in the Congo, his reign of greed and oppression became viewed with reference to the last words of Joseph Conrad's novel 'Heart of Darkness'; "the horror, the horror!" (Conrad, J, 1945) In short, the Belgian colonialism of the Congo was representative of an imperial movement motivated by greed, rather than goodwill or humanitarian concern. The Belgian nation's alleged 'peaceful colonial policy' was nothing but a thinly veiled cover story masking the Belgian's true motive; greed. Not only did the Belgian colonialists exploit the nation's natural resources, enslave the native peoples and enforce a foreign form of diplomacy, but they also failed to fulfil their promises to foster a sense of European civilisation among the Congolese. Belgium falsely represented the colonisation and exploitation of the Congo as a philanthropic experiment stemming from a national sense of goodwill and humanitarian concern. Compelling evidence and personal recounts has made it hard to disagree that the Belgian colonialist movement was almost exclusively motivated by greed. The heartless actions of the Belgians has left a permanent scar on the pride of the Congolese people, and even today "the wailings from the Congo are slow and repressed, but irresistibly, the cry grows" (Baver, L, 1935). ...read more.