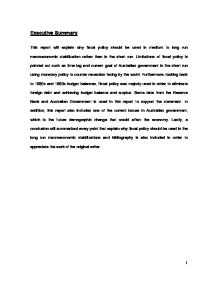 Conclusion In conclusion, the limitations of fiscal policy such as time lag and influence of political view explains why fiscal policy should not be used in short run period but in the long run macroeconomic stabilizations. Secondly, with the goal to eliminate the recession gap in the short run, government uses monetary policy instead of fiscal policy because nominal interest rates have a direct relationship with real interest rates as Fisher equation shown. Furthermore, the success of fiscal policy in eliminating the budget deficit and foreign debt in 1990s and achieved budget surplus by charging high tax rate lead to increase in National Saving shows that fiscal policy should be used in long run macroeconomic stabilizations. Thus, from the National Saving, Australian government paid the foreign debt. In the end, with an expectation of demographic change in Australia, the government has to adjust their current fiscal policy so that budget surplus would not always be the goal but to counter the future spending such as health care and public transport for the aging population which are highly more than proportionate birth rate in the future. Therefore, this report explains why fiscal policy should be used in long run macroeconomic stabilizations but not for short run. ...read more.