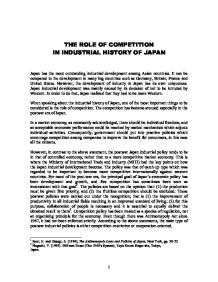 The role of competition in industrial history of Japan

THE ROLE OF COMPETITION IN INDUSTRIAL HISTORY OF JAPAN Japan has the most outstanding industrial development among Asian countries. It can be compared to the development in many big countries such as Germany, Britain, France and United States. However, the development of industry in Japan has its own uniqueness. Japan industrial development was mainly caused by its decision of not to be intruded by Western. In order to do that, Japan realized that they had to be more Western. When speaking about the industrial history of Japan, one of the most important things to be considered is the role of competition. The competition has become aroused especially in the postwar era of Japan. In a market economy, as commonly acknowledged, there should be individual freedom, and an acceptable economic performance could be reached by market mechanism which adjusts individual activities. Consequently, government should put into practice policies which encourage competition among companies to improve the benefit for consumers, in this case all the citizens. However, in contrast to the above statement, the postwar Japan industrial policy tends to be in that of controlled economy, rather than to a more competitive market economy. ...read more.

Furthermore, in those ages, the Antimonopoly Act was amended to relax. Especially, the amendment in 1953 permitted the two types of cartel: rationalization cartel and depression cartel. In this respect, it is also recognized that the government in those days intended to eliminate fruitless or excessive competition. The priority production system aimed at the entirety of steel and coal mining industries for protection and promotion, but in the industry rationalization policy and the protection and promotion measures in the 1950s, the superior enterprise in the said industries became the subject of preferential measures. The second phase is the policies in 1960s. As the competition with foreign enterprises became the real issue, the opinion that "we must strengthen the international competitiveness by eliminating the domestic excessive competition and enlarging size of business" became more powerful, and then industrial reorganization was attempted by promoting mergers. Actually, big mergers occurred in the 1960s. There is no doubt that the merger supporting measures by the government really promoted mergers, but it is interesting that the private enterprises had reluctance in accepting the way of government leading style. This is nothing else but the appearance of this fact, which the Bill on Extraordinary Measures for the Promotion of Specific Industry was discarded. ...read more.

The FTC has increased its formal enforcement activity, strengthened its guidelines about horizontal and vertical issues, modernized its merger standards, added to its staff and budget, and raised its profile in advising about competition issues at other ministries. Despite the recent successes, competition policy remains an awkward import into Japan's business and government culture, and its long-term status remains uncertain. A recent analysis by Japanese and British scholars describes the FTC as "a unique and vulnerable agency administering deeply unpopular laws based on a widely rejected model of market competition," playing an "ambiguous and difficult" role, with a "huge gap" between its theoretical powers and its actual practice. The gap is closing, but "the renaissance of competition policy in Japan is recent, partial, and far from fully secure."4 1 Iyori, H. and Uesugi, A. (1994), The Antimonopoly Laws and Policies of Japan, New York, pp. 30-52. 2 Noguchi, Y. (1995) 1940 nen Taisei (The 1940's System), Toyo Keizai Sinpo-sha, Tokyo, Japan. 3 OECD Review, Regulatory Reform in Japan: The Role of Competition Policy in Regulatory Reform, July, 23, 1999 4 Sanekata, K. and Wilks, S. (1996), "The Fair Trade Commission and the Enforcement of Competition Policy in Japan," in Comparative Competition Policy: National Institutions in a Global Market, G. B. Doern and S. Wilks, ed., pp. 102, Oxford. ?? ?? ?? ?? 1 ...read more.