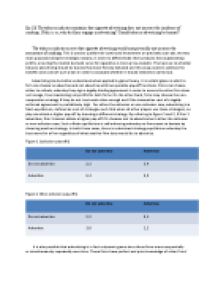 The tobacco industry maintains that cigarette advertising does not increase the incidence of smoking. If this is so, why do firms engage in advertising? Should tobacco advertising be banned?

﻿Qn 13) The tobacco industry maintains that cigarette advertising does not increase the incidence of smoking. If this is so, why do firms engage in advertising? Should tobacco advertising be banned? The tobacco industry asserts that cigarette advertising would unequivocally not increase the occurrence of smoking. This is used to justify their continued investment on precisely such ads, the two main purposes being for strategic reasons, in order to differentiate their products hence generating profits, ensuring the market demand curve for cigarettes is more price-inelastic. The topic as to whether tobacco advertising should be banned has been fiercely debated and this essay seeks to address the benefits and costs of such a ban in order to evaluate whether it should indeed be carried out. Advertising can be better understood when applied to game theory, it is a static game in which a firm can choose to advertise and not advertise with two possible pay-off functions. Firms can choose either to collude, whereby they sign a legally-binding agreement in order to ensure the other firm does not renege, thus maximizing net profits for both firms. On the other hand, firms may choose the non-cooperation strategy if they do not trust each other enough and if the transaction cost of a legally-enforced agreement is prohibitively high. For either the collusion or non-collusion case, advertising is a Nash equilibrium, defined as a set of strategies such that when all other players use these strategies, no play can obtain a higher pay-off by choosing a different strategy. ...read more.

As a result of the price inelastic demand curve, these firms can now charge a higher price for the good. Furthermore, the firm?s market share is increased as the price of the sales rise, resulting in a larger proportion of the market being captured by the firm in question The prime motive of firms to advertise is maximizing profits; unfortunately, this is often at the expense of negative externalities: tobacco ads will only increase cigarette sales and consumption regardless of what the industry might believe. Second-hand smoke can result in increased incidence of disease and illnesses which can be debilitating and hence possibly affect productivity of workers. Furthermore, smoking might become a ?culture? due to aggressive advertising, leading to negative externalities in the form of social ills. A negative externality is a cost to the third party not taken into account by the price mechanism or affecting producers or consumers themselves Hence due to the external marginal cost, there is a divergence in the social and private marginal cost curves. Since the producer only takes into account private marginal benefit and cost, the equilibrium quantity of tobacco produced will be Qe. Hence, there will be overconsumption of cigarettes of Qe-Qse, leading to societal deadweight loss of area ABC (refer to figure 3). Figure 3: Deadweight loss and overconsumption arising as a result of the negative externality due to smoking cigarettes To correct this market failure, the government may use methods like taxation and regulation; however, all these costs could strain the government budget. ...read more.

The key is that the advertising itself aids the brand who has paid for it in order to generate publicity for the brand and the related tobacco products. Such publicity would boost the firm?s net profits. However, whilst complete bans might result in decreased publicity, not spending the firms? funds on advertising has the effect of actually reducing the costs incurred, hence increasing the firms? net profits by other means. The strategy of the firm in the case of a ban would be to cut advertising costs altogether in order to boost net profits and hence maintain competitiveness under the circumstances of a ban. Firms can strategize, choosing to reduce the cost side of the equation completely, for instance not using advertising as well when other firms attempt to circumvent the ban by other methods like sponsorships. Overall, I feel that banning tobacco advertisements completely is not a good idea. Besides, firms can always switch to alternative measures to promote their products via promotions and sponsorships to counteract this. I suggest a regulatory panel be created to filter out advertisements that promote such products as a form of ?culture?. However, not all the ads should be banned, there should be a degree of freedom for these firms to advertise, promote their products and hopefully provide information to the public to correct asymmetric information transparently. The government should focus its efforts on education to tackle the root of the problem, inculcating the correct values into the nation?s youth from a tender age in order for them to internalize the consequences of smoking, hence reducing their perceived marginal benefits of smoking which will result in decreased consumption of smoking (refer to figure 3) ...read more.