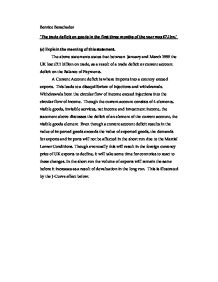 'The trade deficit on goods in the first three months of the year was &amp;pound;7.1bn.' Explain the meaning of this statement.

Bernice Berschader 'The trade deficit on goods in the first three months of the year was �7.1bn.' (a) Explain the meaning of this statement. The above statements states that between January and March 1999 the UK lost �7.1 billion on trade, as a result of a trade deficit or current account deficit on the Balance of Payments. A Current Account deficit is where imports into a country exceed exports. This leads to a disequilibrium of injections and withdrawals. Withdrawals from the circular flow of income exceed injections into the circular flow of income. Though the current account consists of 4 elements, visible goods, invisible services, net income and investment income, the statement above discusses the deficit of an element of the current account, the visible goods element Even though a current account deficit results in the value of imported goods exceeds the value of exported goods, the demands for exports and imports will not be affected in the short run due to the Martial Lerner Conditions. Though eventually this will result in the foreign currency price of UK exports to decline, it will take some time for countries to react to these changes. In the short run the volume of exports will remain the same before it increases as a result of devaluation in the long run. ...read more.

Assuming 'caterus paribus' this will cause imports to rise and exports to fall, the current account balance will be badly affected. A declining comparative advantage in many areas could lead to a balance of payment imbalance. The advantage that countries have in producing certain goods and services can change over time, as technology alters and other countries exploit their economic resources and develop competing industries. The UK manufacturing sector, for example has suffered over the last 25 years from the emergence of low cost production in newly industrialised countries. In essence a number of diverse factors can lead to a current accounts deficit, however most of the time it is a mixture of numerous issues which leads to the imbalance. (c)Evaluate measures a government could adopt to help improve the international competitiveness of a country's industries. A government could adopt a number of measures to improve international competitiveness, the methods can be divided into two types of policies, expenditure reducing policies and expenditure switching policies. Expenditure reducing policies aim to reduce the spending carried out by firms and consumers alike to reduce the demand for imports and thereby causing imports to decline. This policy could be implemented through the imposition of higher income tax of higher interest rates. Higher income tax will reduce real disposable incomes and should lead to a fall in expenditure on imports. ...read more.

This problem is illustrated through the J curve. Assume an economy starts at position A with a substantial current account deficit as a result of depreciation in the value of the exchange rate, initially the volume will remain steady because contracts for imported goods and services will have already been signed, and the demand for exports will not change significantly because export contracts will have already been signed. As a result the current account deficit may worsen in the short run. However, if we assume that the demand for exports and imports is elastic, the current account balance will improve in the long run. This is the Marshall Lerner Condition, in which firms will begin to start signing new contracts that will take into account the relative price changes. If the elasticities of demand for imports and exports are much higher than the deficit, a current account surplus can occur. It is important to understand that the depreciation of the exchange rate alone will not be sufficient to correct a current account deficit, other policies will also be needed to improve supply side performance and make domestic goods and services more competitive in the international market. The key to controlling a current account deficit in the long run if for the economy to achieve a relatively low inflation with sufficient productive capacity to meet the demand of the consumers. This will require a period of low interest rates, low inflation and competitive exchange rates matched with non-price competitiveness abroad. ...read more.

This essay responds to the questions superbly. There is sufficient knowledge shown throughout, and there are some perceptive debates in the evaluative section. Critical language such as "it is important to understand" shows awareness of the significance of factors affecting ...

This essay responds to the questions superbly. There is sufficient knowledge shown throughout, and there are some perceptive debates in the evaluative section. Critical language such as "it is important to understand" shows awareness of the significance of factors affecting policies. Although this doesn't seem evaluative, where teachers define this as simply posing limitations or otherwise, it is in fact what the examiners are looking for. Such style allows for credit to be gained. I would've liked to have seen some discussion of "it depends upon" or "the extent relies greatly upon" as this would've prompted the essay to look further into different situations.

The analysis here is strong. The definition of a current account deficit is great, with the varying types of trade being explained. The inclusion of the Marshall Lerner condition (not Martial Lerner) didn't seem relevant here, albeit a very strong piece of analysis. In my opinion this, along with the diagram, needs to be in the evaluative section when discussing policies. It is vital that you don't jump steps in an economics essay - throwing in analysis too early shows a poor structure and style. I was pleased to see awareness that if one economy is running a deficit, then another must be running a surplus. This shows understanding beyond the A-Level syllabus, as it shows awareness that other countries may be to blame (which some argue China's huge surpluses are to blame currently). Phrases such as "some economists believe" make the points strong, as there are a number of factors which contribute to current account deficits. Comparative advantage is an area I felt could've been elaborated upon, as this is a sophisticated concept. Expenditure switching, and expenditure reducing policies are fluently explained. I would've liked to have seen the J-curve here, as this would've supported this argument.

Although this essay is directed by the questions set, this would be a fine structure to follow for an essay. A strong definition of the key terms, then analysis of the mechanism in question and finally evaluation of the policy - this is a structure I would always recommend. The style here is strong, and makes for a convincing argument. Technical terms are used confidently, and spelling, punctuation and grammar are flawless.