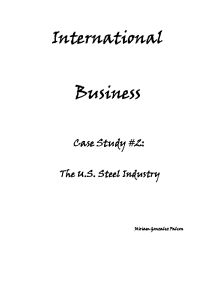 International Business Case Study #2: The U.S. Steel Industry Miriam Gonzalez Falcon Executive Summary Steel trade has been an important industry, from a strategic perspective, as it U.S. weapons production, ship building, etc, ...and from a national perspective, as steel is an important input for products like cars, washing machines, etc...Over the past 100 years, the U.S. steel industry has gone from producing 37% of the worlds steel to approximately 15%. Also since the 1960's, the growth in steel production has leveled off due the increase in the use of plastics and the technological improvements in manufacturing. U.S. steel costs are normally higher in the U.S. due to the wages and benefits productions to employees and retires; in 1976, import restrictions imposed had little effect, hence U.S. steel is still considered of lower quality. By 2002, 31 U.S. steel companies filed for bankruptcy protection. Given the situation, there are a number of strategies that U.S. government should consider, including that the U.S. government should not be involved in protecting the steel, but instead should allowed for free trade, imposing import restrictions in the form of a tariff on imported steel, or offering support to the U.S. steel industry in the form of subsidies and/ or the absorption of legacy costs. ...read more.

The opportunity should not be missed; it will allow U.S. to reduce costs and invest in modern technologic equipment for the increase of steel industry benefits. Under a consumer point of view, this free trade will be beneficial, because we could purchase for a lower price; the free trade also means, in terms of consumer, more imports, so, at the same time, more variety for the consumer. Finally, the U.S. taxpayers will be also beneficiated with this strategy of free trade, because they will avoid paying tariffs, which obviously is always beneficial for a business. This strategy of free trade also has important disadvantages that need to be considered. First, the free trade is likely to import raw materials, as I have said before, so the U.S. industry will be damaged, specially the refining industry (part of the steel industry production), because, if they can import the same materials from another country with a lower price, they will product less nationally, and this means that a lot of workers will lose their jobs, so the implied meaning to this, is that the U.S. industry will become mediocre. The domestic reaction from other U.S. industries that are hurt by imports will be really harmful for the U.S. ...read more.

steel industry, it also has many risks; the domestic reaction from other U.S. industries that are in a similar situation will be a serious problem for the government, because they will want to enjoy the same advantages as the steel industry enjoys. Recommendation Given an analysis of the alternatives, it is recommended that the U.S. government should consider offering support to the U.S. steel industry, both in the form of subsidies and in the absorption of the legacy costs. This change in the government administration, will enforce U.S. industries and will be beneficial not only for the steel industry, but also for the industry in general, because the steel industry is also responsible of the development of many other industries, such as the car production, buildings, ships, etc...so it will also help to maintain and create more jobs, so the life standard will be improved. Hence this improvement, U.S. steel industry, even it's known that it will be a slow process, will be able to compete with other nations, such as European or South Korea, that owns the biggest steel mill in the world, which make their steel industry independent enough to compete worldwide. Following this, U.S. steel industry income will be higher, consequence of the successful competition based on an international scale. Finally, this new measures will help U.S. steel industry to prevent bankruptcy situations, helped with the attachment of protectionist laws. 2 ...read more.