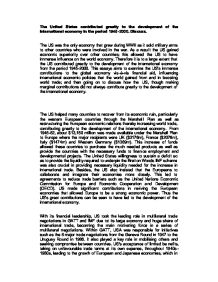 The US was the only economy that grew during WWII as it sold military arms to other countries who were involved in the war. As a result the US gained economic superiority over other countries; this allowed the US to have immense influence on the world economy. Therefore it is to a large extent that the US contributed greatly to the development of the international economy from the period 1945-2000. This essays aims to examine the US’s immense contributions to the global economy vis-à-vis financial aid, influencing international economic policies that the world gained from and in boosting world trade; and then going on to discuss how the US, though making marginal contributions did not always contribute greatly to the development of the international economy.

The US helped many countries to recover from its economic ruin, particularly the western European countries through the Marshall Plan as well as restructuring the European economic relations thereby increasing world trade, contributing greatly to the development of the international economy. From 1948-52, about $13,150 million was made available under the Marshall Plan to Europe where the major recipients were UK ($3176m), France ($2076m), Italy ($1474m) and Western Germany ($1389m). This increase of funds allowed these countries to purchase the much needed products as well as provide the countries with the necessary funds to finance employment and developmental projects. The United States willingness to sustain a deficit so as to provide the liquidity required to underpin the Bretton Woods IMF scheme was also crucial in providing necessary liquidity needed for the increase in international trade. Besides, the US also insisted that the Europeans to collaborate and integrate their economies more closely. This led to agreements to reduce trade barriers such as the United Nations Economic Commission for Europe and Economic Cooperation and Development (OECD). US made significant contributions in reviving the European economies that allowed Europe to be a strong economic power. Thus the US’s great contributions can be seen to have led to the development of the international economy.

With its financial leadership, US took the leading role in multilateral trade negotiations in GATT and IMF due tot its large economy and huge share of international trade, becoming the main motivating force in a series of multilateral negotiations. Within GATT, USA was responsible for initiatives such as the 8 major trade negotiations from the Geneva Round in 1947 to the Uruguay Round in 1986. It also played a key role in mobilising others and seeking compromise between countries. US's acceptance of limited benefits, taking on unfavourable trade terms at its own expense, throughout 1940s-1950s, leading to the growth of European and Japanese economies, which in turn stimulated world trade in the long term. Through the IMF, the US would use the convertible financial system to trade at a tremendous profit with developing nations, expanding industry and acquiring raw materials. It would then use this surplus to send dollars to Europe, which would then be used to rebuild their economies and make US the market for their products. This would allow European nations to purchase products from the Third World, which reinforces the American role as the guarantor of stability.

The role played by US multinational corporations contributed greatly in the initial development of the international economy, but soon faded away with the rise of other countries economy. US MNCs was seen as beneficial in kick starting the global economy as MNCs depended heavily on treaties, trade agreements with and national policies of governments, they provided incentive for international cooperation and stimulated the development of global community. American business investment abroad accounted for $32 billion in 1960 and this helped developing countries by contributing to the development of infrastructure, providing employment opportunities, expanding the manufacturing and industrial sector, transferring the much needed technology and managerial skills and increasing the foreign exchange earnings, such as in Asia and Latin America, These foreign affiliates of MNCs in turn contributed to the growing role of developing countries in world trade. However with the rise of Asia and Latin America economy, more countries will tend to protect their domestic economy from excess foreign goods, leading to the decline US MNCs. Japan's “export expansion & import restriction policy” help nascent industries such as the auto industry with high tariffs and a complex web of rules and regulations that discouraged foreign manufacturers from penetrating the Japanese market. By utilizing both import protection and export promotion to safeguard traditional high employment industries while securing a string position in high technology industries. The importance of US MNCs cannot be overlooked even though their initial success was short lived, caused by the other emerging Asian and European economy.

The US role as a leading technological powerhouse was a significant contributory factor that led to the development of the international economy. Technological innovation in mass production achieved greater capacity of production. the global economic surge was also powered by new or improved products, some of which were derived from war technology. Such innovations not only diversified the economy, bringing into prominence the service industries like advertising, they also boosted trade because of the increase in consumer purchasing for novelty & portable objects. Because of its technological edge over other countries, the US is able to engage in research and development , which became central to the growth of economies and this constantly gave USA the comparative advantage over the rest of other developed countries. The dominance in US technology sector can also be seen when of all the major innovations between 1945-late 1960s, 60% of which were produced by US companies due to its higher ratio of research and development expenditures than other countries. This therefore shows that the technological advancement in the US of A was beneficial and contributed substantially to the development of the global economy.

However, when the US ran into deficits, Bretton Woods entered a period of crisis which lead ultimately to its collapse, plunging the whole economy into a crisis as the US dollar was the world's major currency that was pegged by almost every other currency. The US failed to consider the impact of US deficits on the world's economy. President Johnson followed its domestic agenda regardless of international consequences. The failure of the US to take measures to address its deficits caused massive outflow of dollar. Dollars were withdrawn or sold by speculators due tot he loss in confidence of the dollar, known as the run on the dollar in 1971. The US's gold stock plummet to $10 billion, leading to inflation and high unemployment. President Nixon was forced to respond due to political pressure, and worsened the international economy instead by announcing a new economic policy and the inconvertibility of the dollar into gold which broke the international monetary system as the exchange rates were supposed to be free. The Bretton Woods system collapsed. Floating exchange rates contributed to increasing inflation to deal with the balance of payment difficulties.

Despite its significant contributions, the US’s contributions actually hindered the development of international economy as it led to the shaky balance of US's trade position and devaluation of the dollar which affected many countries. By encouraging the outflow of dollars, US provided the necessary liquidity for the international economy allowing a period of rapid economic growth known as the Golden Age. The dollar thus became the world’s currency and the US as the world’s banker. Ironically this constant flow of US dollars eventually undermined US economy as it incurred a deficit jeopardising the confidence in the dollar. While the US dollar certainly helped Europe and Japan with posy-war recovery, the decline of the dollar from the late 1960s threatened the foundation that had underpinned the post-1945 global trading system. The Vietnam War and the refusal to pay for it's own Great Societal program through taxation resulted in an increased dollar outflow to pay for the military expenditures and rampant inflation, which led to the deterioration of the US balance of trade position. Doubtful that US had sufficient gold in exchange for the dollar, the market devalued the dollar. In the long run, US's failure to address it's deficits also led to a run on the dollar contributing to the monetary crisis in the 1970s which affected the whole international economy.

In conclusion, this essay explained how USA was crucial in the development of the international economy in the period of 1945- 2000. Still, it must be acknowledged that the US's contributions had limitations, if not failures, such as the devaluation of dollar and ultimately leading to the Crisis Decades.