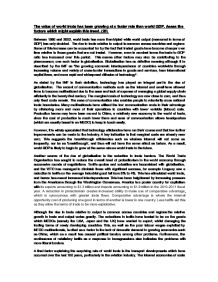 The value of world trade has been growing at a faster rate than world GDP. a***s the factors which might explain this trend. Evaluate the disadvantages of further trade liberalisation to the UK.

The value of world trade has been growing at a faster rate than world GDP. a***s the factors which might explain this trend. (20) Between 1980 and 2002, world trade has more than tripled while world output (measured in terms of GDP) has only doubled. The rise in trade relative to output is common across countries and regions. Some of this increase can be accounted for by the fact that traded goods have become cheaper over time relative to those goods that are not traded. However, even in nominal terms the trade to GDP ratio has increased over this period. This means other factors may also be contributing to the phenomenon; one such factor is globalisation. Globalisation has no definitive meaning although it is described by the IMF as "the growing economic interdependence of countries worldwide through increasing volume and variety of cross-border transactions in goods and services, freer international capital flows, and more rapid and widespread diffusion of technology". As stated by the IMF in their definition, technology has played an integral part in the rise of globalisation. The ascent of communication methods such as the internet and email have allowed firms to become multinational due to the ease and lack of expense of managing a global supply chain efficiently in the twenty-first century. ...read more.

be questioned but also because the rise of the BRICs may soon mean MEDCs can no longer determine the conditions of trade as they used to. Evaluate the disadvantages of further trade liberalisation to the UK. (30) Trade liberalisation is considered to be the removal or reduction of restrictions or barriers on the free exchange of goods between nations. This includes the removal or reduction of both tariff (duties and surcharges) and non-tariff obstacles (like licensing rules, quotas and other requirements). Over the last 50 years trade liberalisation in the UK has become very popular, with the abolishment of capital restrictions in 1979 and the WTOs influence. One consequence of trade liberalisation has been increased insecurity in the workplace. Manual workers are particularly under threat as companies outsource their production lines overseas to low-wage economies. Many factory workers in the UK have been made unemployed as multinational firms have chosen to relocate their production teams in lower-cost economies such as China or India. Often it can be difficult for these workers to find employment in growth industries due to their lack of knowledge or skill in industry and government assistance is necessary (in the form of training programmes).This causes increased unemployment. ...read more.

Trade liberalisation allows multinationals to develop by making it possible to split the production process between different companies (helping to minimise costs) due to transportation and technological developments, as well as reducing tariffs to help these companies get their products into as many countries as possible. The top 500 multinational corporations account for nearly 70 percent of the worldwide trade; this percentage has steadily increased over the past twenty years. However, despite making supernormal profits and using huge quantities of the world's scarce resources some of these companies produce significant externalities through their disregard for the environment. The world's 3,000 largest companies are causing �1.4 trillion worth of environmental damage every year, through the release of greenhouse gases and over-use and pollution of freshwater and fisheries. Other negative externalities include regulatory capture and loss of national culture. However, companies such as Innocent are setting a new precedent for global corporations. Fair Trade has also become popular in the UK, and so externalities from multinationals may soon fade. Overall, the advantages and disadvantages of trade liberalisation are still relatively unclear as globalisation is a new concept. Although the UK government has control of certain tariffs within the UK it must be remembered that it must also adhere to regulations set by the EU and WTO and some disadvantages of trade liberalisation may simply have to be put up with. ...read more.