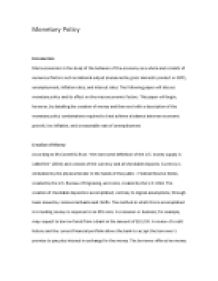 This paper will begin by detailing the creation of money and then end with a description of the monetary policy combinations required to best achieve a balance between economic growth, low inflation, and a reasonable rate of unemployment.

﻿Monetary Policy Introduction Macroeconomics is the study of the behavior of the economy as a whole and consists of numerous factors such as national output (measured by gross domestic product or GDP), unemployment, inflation rates, and interest rates. The following paper will discuss monetary policy and its effect on the macroeconomic factors. This paper will begin, however, by detailing the creation of money and then end with a description of the monetary policy combinations required to best achieve a balance between economic growth, low inflation, and a reasonable rate of unemployment. Creation of Money According to McConnell & Brue, ?the narrowest definition of the U.S. money supply is called M1? (2004) and consists of the currency and all checkable deposits. Currency is embodied by the physical tender in the hands of the public ? Federal Reserve Notes, created by the U.S. Bureau of Engraving, and coins, created by the U.S. Mint. The creation of checkable deposits is accomplished, contrary to logical assumptions, through loans issued by commercial banks and thrifts. The method in which this is accomplished is in lending money in response to an IOU note. A consumer or business, for example, may request to borrow funds from a bank in the amount of $10,000. ...read more.

This describes the reason an increase in money supply increases the inflation rate. Moneychimp.com defines the unemployment rate as the ?percentage of employable people actively seeking work, out of the total number of employable people? (2008). This rate is actually indirectly related to the money supply since it is directly related to the GDP. An increase in spending and investments spurs increased demand, as described earlier. As such, output may be raised to supply that demand through a larger workforce; hence, an increase in money supply will serve to increase GDP which will, in turn, reduce the unemployment rate. The Best Monetary Policy Unfortunately, there is no ?best policy? when it comes to maintaining continued economic growth, control on inflation, and low unemployment rates. Many outside forces contribute to these macroeconomic factors as may be witnessed in the Monetary Policy simulation found in the University of Phoenix rEsource. Each tool the Federal Reserve employs in efforts to achieve economic harmony have varied levels of effect and can be greatly influenced by outside forces, such as foreign production or prices. The best monetary policy that may be employed in such a situation is a dynamic policy, one capable of being changed the moment a new factor is introduced to the equation. ...read more.