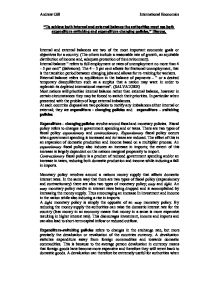 &quot;To achieve both internal and external balance the authorities must use both expenditure switching and expenditure changing policies.&quot; Discuss

"To achieve both internal and external balance the authorities must use both expenditure switching and expenditure changing policies." Discuss. Internal and external balances are two of the most important economic goals or objectives for a country. (The others include a reasonable rate of growth, an equitable distribution of income and, adequate protection of the environment). Internal balance " refers to full employment or rates of unemployment no more than 4 - 5 per cent" (Salvatore). The 4 - 5 per cent allows for frictional unemployment, that is the transition period between changing jobs and allows for re-training for workers. External balance refers to equilibrium in the balance of payments - " or a desired temporary disequilibrium such as a surplus that a nation may want in order to replenish its depleted international reserves". (SALVATORE) Most nations will prioritise internal balance rather than external balance, however in certain circumstances they may be forced to switch their priorities. In particular when presented with the problem of large external imbalances. At each countries disposal are two policies to rectify any imbalances either internal or external; they are expenditure - changing policies and expenditure - switching policies. ...read more.

A tight monetary policy is simply the opposite of an easy monetary policy. By reducing the money supply the authorities can raise the domestic interest rate for the country (less money in an economy means that money in a sense is more expensive resulting in higher interest rats). This discourages investment, income and imports and can also lead to short-term capital inflow or reduced outflow. Expenditure-switching policies refers to changes in the exchange rate, but more precisely the devaluation or revaluation of the countries currency. A devaluation switches expenditure away from foreign commodities and towards domestic commodities. This is because to the average person devaluation in currency means that foreign goods have become more expensive and therefore they will revert back to domestic goods. A devaluation can therefore be extremely useful for authorities when there is a deficit in a countries balance of payments. However part of the original improvement is neutralised as a devaluation also increases domestic production and therefore also imports. (Balance of payments can be defined as "a summary statement of all international transactions of the residents of a nation with the rest of the world over the course of a year") ...read more.