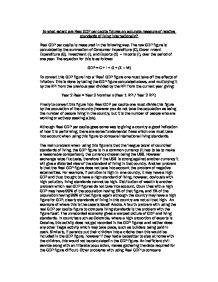 To what extent are Real GDP per capita figures an accurate measure of relative standards of living internationally?

To what extent are Real GDP per capita figures an accurate measure of relative standards of living internationally? Real GDP per capita is measured in the following way. The raw GDP figure is calculated by the summation of Consumer Expenditure (C), Government Expenditure (G), Investment (I), and Exports (X) - Imports (I), over the period of one year. The equation for this is as follows: GDP = C + I + G + (X - M) To convert this GDP figure into a 'Real' GDP figure one must take off the effects of inflation. This is done by taking the GDP figure calculated above, and multiplying it by the RPI from the previous year divided by the RPI from the current year giving: Year 2 Real = Year 2 Nominal x (Year 1 RPI / Year 2 RPI) Finally to convert this figure into Real GDP per capita one must divide this figure by the population of the country (however you do not take the population as being the number of people living in the country, but it is the number of people who are working or actively seeking a job). ...read more.

An example of where this is the case is Saudi Arabia. A fourth problem with using the real GDP per capita figure to compare living standards is the problem with the figure itself. The unrecorded economy gives a warped picture of GDP and living standards. In countries such as Colombia, where a high proportion of exports is Cocaine, this activity does not get recorded in the GDP figures and neither does any other illegal activity which may take place, such as builders being paid in cash. Similarly, if parents put their children into a cr�che then this would be included in the GDP figure, however if they had a babysitter to stay at home with the children, this would not be calculated in the GDP figure. An inefficient civil service along with an illiterate population, makes gathering the data required for the GDP figure difficult. Other problems with using Real GDP to compare international living standards include the hours worked to produce the output, and the quality of the goods produced. ...read more.

The devisers of the MEW believe that the GDP gives an inflated figure of welfare. Although Real GDP per capita may in some ways be a good measure for comparing international living standards, there are a number of fundamental flaws, which means that it may not be the best method of measuring standard of living. A better figure for comparing living standards is gross national income (GNY). The figure for GDP fails to include some key components of living standards, negative externalities and distribution of income being the most important two and, considering the actual collection of the data for the GDP figure contains many errors, such as the underground economy and tax evasion, this figure cannot be considered an accurate comparison of living standards. The three other methods described earlier take into account a far wider range of indicators, not just the output of a country as indicated by GDP, and therefore can be regarded as a better, although not perfect, method for comparing relative standards of living internationally. ...read more.