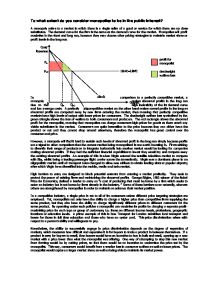 To what extent do you consider monopolies to be in the public interest?

To what extent do you consider monopolies to be in the public interest? A monopoly refers to a market in which there is a single seller of a good or service for which there are no close substitutes. The demand curve for the firm is the same as the demand curve for the market. Monopolies will profit maximise in the short and long run, however they may choose other pricing strategies to maintain market share or profit levels in the long run. In comparison to a perfectly competitive market, a monopoly makes abnormal profits in the long run due to the high inelasticity of the its demand curve and low average costs. A perfectly competitive market on the other hand makes normal profits in the long as abnormal profits are competed away by new firms entering the market; thus meaning that perfectly competitive markets have high levels of output with lower prices for consumers. The deadweight welfare loss symbolised by the green triangle shows the loss of welfare to both consumers and producers. The red rectangle shows the abnormal profit for the monopolist, meaning that monopolies can charge consumers high prices for goods as there aren't any viable substitutes in the market. Consumers are quite insensitive to the price because they can either have the product or not and they cannot shop around elsewhere, therefore the monopolist has great control over the consumer and price. However, a monopoly will find it hard to sustain such levels of abnormal profit in the long run simply because profits are a signal to other competitors that the current market being monopolised is one worth investing in. ...read more.

Although monopolies have the means to invest in research and development, they might opt out of pushing the boundaries of technology and restrict innovation. One example is when Microsoft, who control 97% of the home operating systems market, buy out new ideas and shelf them rather than producing them. They essentially dictate the progression in technology for their market as they decide which ideas are put forward and made or which ones are shelved. Nevertheless restricted innovation is better than no technological progression because in a perfectly competitive market firms would be making a normal profit therefore they wouldn't have the means to invest in research and development, thus leaving the market stagnant and unable to move forward. At least with a monopoly, new products are consistently being made to satisfy demand. A firm may have substantial domestic monopoly power but faces intensive competition from overseas producers, which limits their market power and helps keep prices down for consumers. Steel producer, Corus Steel which was taken over by Indian group Tata Steel, is the biggest in the UK, however in terms of the global market, its net income in 2005 was a mere 13.4% of Mittal Steel's net income. Mittal Steel had sufficient funding to gain from inorganic economies of scale by merging with Arcelor to become Arcelor Mittal, the world's largest steel producer. Therefore a monopoly has to be taken in terms of the global market rather than its relative position in domestic market. ...read more.

because poor processes and systems meant that customers received poor service. Therefore to ensure that that they aren't fined, monopolists vary their price strategies for different products, by perhaps using a revenue maximising strategy in which they produce at the level of output at which marginal revenue equals zero. Alternatively, they could sales maximise where average cost equals average revenue. Both these strategies would lead to a fall in the price for the consumer. The essential argument against monopolists is that they are free to charge a high price to consumers and thus make large abnormal profits. Yet, with strict regulation agencies set up, any company can be fined up to 10% of their revenue thus meaning they would be eager to cut prices to keep their consumers satisfied. Even though there aren't any other incumbents in the market, monopolists behave as if they were in a competitively perfect market, investing money into research and development to further the progress of their products. Given that many monopolies do not have a guaranteed run of abnormal profits they would always have to think of new ways to ensure that other competitors cannot join the market. They are the ones in turn that make the major advancements in science and technology, or in fact can buy out good ideas to guarantee that an innovative idea has enough financial backing to be produced. As said by Milton Friedman, "markets work, governments don't". By leaving a monopoly market to grow by itself means that the consumer will benefit largely in the long run even if they have to pay a slightly higher price in the short run. ?? ?? ?? ?? ...read more.