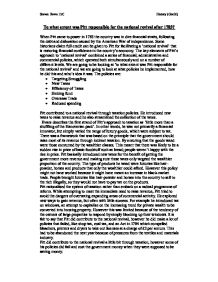 To what extent was Pitt responsible for the national revival after 1783?

To what extent was Pitt responsible for the national revival after 1783? When Pitt came to power in 1783 the country was in dire financial straits, following the debt and dislocation caused by the American War of independence. Some historians claim full credit can be given to Pitt for facilitating a 'national revival' that is restoring financial confidence in the country's economy. The key elements of Pitt's approach to 'national revival' combined a series of financial, administrative and commercial policies, which operated both simultaneously and on a number of different levels. We are going to be looking at 'to what extent was Pitt responsible for the national revival' and we are going to look at what policies he implemented, how he did this and who's idea it was. The policies are: * Targeting Smuggling * New Taxes * Efficiency of Taxes * Sinking fund * Overseas Trade * Reduced spending Pitt contributed to a national revival through taxation policies. He introduced new taxes to raise revenue and he also streamlined the collection of the taxes. Evans describes the first strand of Pitt's approach to taxation as 'little more than a shuffling of the Hanoverian pack'. In other words, he was not primarily a financial innovator, but simply varied the range of luxury goods, which were subject to tax. ...read more.

It was a means of increasing the volume of legitimate trade. Before this, the importer had to pay import duties immediately on they're landing. With the idea of bonded warehouses the importer put his goods into official storage in a warehouse, where they would be guarded, free of charge. If the goods were taken out of the warehouse for re-export then the importer would be free of charge. The importer paid the duty only when he took out the goods and only on the quantity taken out at any one time. This proved to be a long-term success, with the value of food and raw materials rising. However this was not Pitt's idea because it was proposed by Sir Robert Walpole in 1773. So you can not say he was responsible for the national revival because these ideas and policies he got from other people, however it mean Pitt contributed to the national revival because he implemented these idea. As a result of the American War of Independence the country was in huge finical debt. Pitt's mechanism for dealing with the problem of the national debt was the Sinking Fund - another area of policy where Pitt 'borrowed' and then modified the ideas of others. Sir Robert Walpole introduced the idea of a sinking fund in 1716. ...read more.

This all greatly increased administrative efficiency, reducing the amount of labour required and the level of confusion. The consolidation Fund Act of 1787 meant that 103 accounts were combined and controlled by the treasury. Pitt was responsible for the national revival. However some of these policies/changes/reforms were not his idea (like the sinking Fund) and this is a sign of a good leader if he is able to take in other people's ideas and adapt them to suit the situation. Pitt's policies were: * Targeting Smuggling * New Taxes * Efficiency of Taxes * Sinking fund * Overseas Trade * Reduced spending He targeted smuggling very well and reduced it a lot gaining the government a lot of money. With the policy of new taxes and efficiency of taxes he went about this the right way and reduced spending and saved money. The sinking fund was an excellent policy as it paid off �11 million in debt. Free trade benefits the most efficient producer, and Pitts most successful move in the direction of free trade, the Eden Treaty with France, favoured Britain hugely and was a major benefactor in the national revival. I think that Pitt was very responsible for the national revival as he introduced these policies. Some may say that Pitt was a lucky beneficiary of circumstance as he had time to introduce these policies because he was in power so long. ?? ?? ?? ?? Steven Howe 12C History (Gould) ...read more.