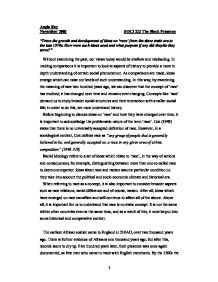 &quot;Trace the growth and development of ideas on 'race' from the slave trade era to the late 1970s. How were such ideas used and what purpose if any did they/do they serve?&quot;

Angie Kay November 2003 SOCI 223 The Black Presence "Trace the growth and development of ideas on 'race' from the slave trade era to the late 1970s. How were such ideas used and what purpose if any did they/do they serve?" Without examining the past, our views today would be shallow and misleading. In making comparisons it is important to look at aspects of history to provide a more in depth understanding of certain social phenomenon. As comparisons are made, ideas emerge which can raise our levels of such understanding. In this way, by examining the meaning of race two hundred years ago, we can discover that the concept of 'race' has evolved; it has changed over time and remains ever changing. Concepts like 'race' demand us to study broader social structures and their interaction with smaller social life; in order to do this, we must understand history. Before beginning to discuss ideas on 'race' and how they have changed over time, it is important to acknowledge the problematic nature of the term 'race'. Cox (1948) states that there is no universally accepted definition of race. However, in a sociological context, Cox defines race as "any group of people that is generally believed to be, and generally accepted as, a race in any given area of ethnic competition" (1948:319) Racial Ideology refers to a set of ideas which relate to 'race', in the way of actions and consequences, for example, distinguishing between more than one so called race to deem one superior. Ideas about race and racism assume particular condition i.e. ...read more.

Black Slaves were not treated as equals, which led to the thinking that racism was born out of the slave trade. However, slavery was not the result of racism, but rather the other way around. Throughout this era, British law was constantly changing and in many ways reflected ideas on race at that time. Walvin (1973) refers to 1677, as the Slave Trade began to grow; the Solicitor General was faced with the Acts of Trade, and defining where the African slaves fitted into it. In his opinion, in order to justify the treatment of African slaves whilst travelling the Atlantic, the Africans would have to be regarded as goods and commodities, commonly known as 'Chattel'. It was from this early legislation that the dehumanisation of the African slaves began. Similarly, in 1783, a court case concerning the compensation wanted for the black slaves lost during the transatlantic journey on the ship 'Zong'. The Lord Chief Justice, Lord Mansfield, refused the compensation and justified the huge death toll of the African slaves due to drowning as 'in the same sense as if horses had also been thrown overboard'. This gave legal approval for labelling African slaves as animals. It is clear that by 1789 the dehumanisation process was complete as hostility and brutalisation towards the black Africans grew as a result of the large numbers who had settled in Britain. In order to legitimise the way in which the Africans were being treated, they were newly defined as 'ignorant beasts'. Racial discrimination and exploitation of the most sickening form were not only used to enhance economic growth, but were also used as political tools to influence the legal system and the masses. ...read more.

It also offers an example of how these ideas can change so dramatically over long periods of time. During the Slave Trade, prejudice was supported by great interest and began to grow and become customary. People became unreasonable in their very reasoning as a result of racist ideologies which had that very purpose; They encouraged thoughts which today would be considered foul and dark, and emotions which would be considered brutal and debased. Rex (1986) stated that "The pith of this ideology is not so much that coloured people are inferior, as that they must remain inferior" (Rex 1986:357) i.e. Black people should be have no rights, no status, no function and no mobility. But was this type of racism socially constructed to serve a purpose; economic success? There became an increased anxiety about the growth of the black population in England and how it would threaten the purity of English blood. But by 1760s, intellectual arguments were formulated against black slavery and in the nineteenth century Britain became proud of its role in supporting black freedom, forgetting the role they had played in black oppression and exploitation. The decades after the abolition of the slave trade saw the emergence of new ideas on race, including a scientific approach and the emphasis on equality and the right to be different. The way in which a change in ideas and broader ideologies can affect many aspects of social life is particularly evident as today we find constant emphasis on equality in our everyday lives, regarding rights, status, function and mobility, just what the black population were deprived of in Britain centuries ago. 1 ...read more.