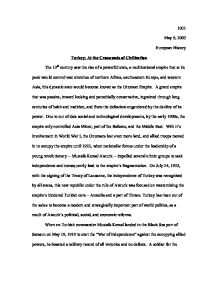 Turkey: At the Crossroads of Civilization.

1021 May 9, 2003 European History Turkey: At the Crossroads of Civilization The 13th century saw the rise of a powerful state, a multinational empire that at its peak would control vast stretches of northern Africa, southeastern Europe, and western Asia, this dynastic state would become known as the Ottoman Empire. A grand empire that was passive, inward looking and parochially conservative, ingrained through long centuries of habit and tradition, and from the defeatism engendered by the decline of its power. Due to out of date social and technological developments, by the early 1900s, the empire only controlled Asia Minor, part of the Balkans, and the Middle East. With it's involvement in World War I, the Ottomans lost even more land, and allied troops moved in to occupy the empire until 1922, when nationalist forces under the leadership of a young revolutionary -- Mustafa Kemal Ataturk -- impelled several ethnic groups to seek independence and consequently lead to the empire's fragmentation. On July 24, 1923, with the signing of the Treaty of Lausanne, the independence of Turkey was recognized by all states, this new republic under the rule of Ataturk was focused on westernizing the empire's hindered Turkish core - Anatolia and a part of Thrace. Turkey has risen out of the ashes to become a modern and strategically important part of world politics, as a result of Ataturk's political, social, and economic reforms. When ex-Turkish commander Mustafa Kemal landed in the Black Sea port of Samsun on May 19, 1919 to start the "War of Independence" against the occupying allied powers, he boasted a military record of all victories and no defeats. ...read more.

Easing the transition between governments, he created a democratic opposition to his government and effected provincial elections with a democratic method, a step that would later aid the reforms he geared towards better international relations. In 1924, the Grand National Assembly created a new constitution that vested full sovereign power in the Grand National Assembly, under the leadership of Ataturk. This constitution would be the first apparent step forward in Ataturk's struggle to build a politically powerful state. Ataturk's political reforms gave Turkey a firm foundation for a society of justice and equal rights, and helped him create a foreign policy that would have Turkey manage to avoid both subversion at home and involvement in war. By the end of 1925, in an unprecedented turnaround, Turkey had signed or negotiated friendship treaties with 15 states (Ataturk, 2). By building his nation from the inside out, Ataturk provided Turkey with a democratic, affluent and stable government which not only proves its important for European security architecture, with her peacekeeping, regional security roles, and participating in the stability of the United Nations and NATO but also presents striking evidence that the values of the East and West can be integrated successfully. The sultans that had presided over the Ottoman Empire had not only ruined the political power and status of Turkey, but had also controlled a social and economic system mired in backwardness and outmoded for modern times. Ataturk focused the ideals of his political reforms into creating a socially adept Turkey that would modernize Turkish life in order to give the nation a new sense of dignity, happiness, and equality and further enhance the political status of Turkey, which was in hopeless need of stability. ...read more.

As a result of his reforms, the annulment of capitulations, fundamentals needed to secure a national and liberal economy were achieved, and Turkey is now the world's sixteenth largest economy, with an 800 million dollar trade volume between trade sister countries in only 2 years (Prof. 3). In 1992, Turkey established the Black Sea Economic Cooperation, with eleven states, which would establish a free trade area, the first movement from a country in Turkey's region to do so. There has been rapid growth, with success in implementing structural reforms measures, and thus Turkey was one of the first countries in the world to join the Council of Europe, be a founding member of the OECD, and become a member of NATO, signing the 1963 Ankara Agreement with 'the Six'. Now economically and socially stable, Turkey was able to proceed in becoming one of the most politically influential countries in the world, and as ex-Secretary of State Henry Kissinger once put it, it would "not [be] possible to sustain stability of the Gulf indefinitely without the effective support of Turkey (Prof. 2)." Ways of life have changed drastically since the 1500's in Turkey. The government under the rule of Ataturk set out to initiate a plan to make Turkey more "modern," and began to sweep away customs and traditions of past generations and enforce swift political, social, and economic reforms that have only made Turkey increasingly important in the international eye. The people of Turkey feel that they are ready to move on, and in many ways look forward to a more "respectable" status in both European and Asian culture, and as the continue their march into the 21st century, Turkey will reinforce its position as a geo-strategic crossroads for the countries of Europe and Asia. 2 ...read more.