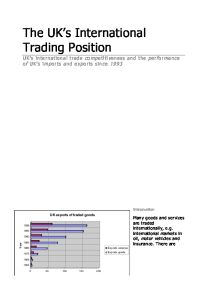 Total exports of services have show a steady increase over the 10 year period and have increased by 116.5%. Total imports of services have a similar trend but not as consistent over the 10 years- a slight dip in rate to 2.5% in 1997 demonstrated this inconsistency. Further data has demonstrated the composition and change in trade in services since 1975. UK citizens spent more on foreign holidays than foreigners taking holidays in the UK, this therefore equated to deficits in transport in 1998. However the UK demonstrates significant comparative advantage in the financial services. These mainly provided by the city of London financial markets providing banking and insurance for instance. New York and Tokyo are the only likely competitors to London's financial market. London is arguably the most significant financial centre in Europe- but Britain's refusal to join the common currency threatens that position. The UK's international trade pattern has changed since the war, where trade patterns established in the Victorian era were continued to be used, buying raw materials from developing countries and selling them manufactured. By the turn of the century UK trade had shifted dramatically, over half of exports were now within the EU- as shown by the graph. Exports to Asia were regarded as unimportant, as shown by the consistent low trend in comparisons to other regions. ...read more.

The Pink book tells us that the USA is consistently the single largest counterpart country within the UK's balance of payments, representing 20 per cent of current account credits and 15 per cent of debits in 2003. There has been a current account surplus with the USA in each year since 1992. Prior to 2000 these were typically between �2.0 billion and �4.0 billion, whereas the most recent periods have seen significantly higher surpluses. 2003 shows a record surplus of �18.6 billion. Evaluation The UK's trading position is heavily reliant on the changing nature of competitiveness across the world. Emerging markets, notably five nations dubbed as the BRICK nations -- Brazil, Russia, India, China, and South Korea are all becoming viable competitors to more established countries and now can benefit from international trade. There are a number of factors which influence the competitiveness of the UK internationally, these include- the level of domestic inflation compared to our competitors, levels of productivity compared to our trading patterns and the level of physical and human resources. These all effect the unit cost of production. By monitoring who we trade with helps us to identify the changing global trading positions and how the UK may be able to influence this. The UK can gain from trade in many ways; decrease in costs, increase in competition, differences in demand and other non-economic advantages. ?? ?? (footnote continued) ?? ?? UK's International Trading Position Jagtar Singh Pandha - 2 - ...read more.